Blog
You are here: Home / Blog / New Releases / Can a Half Make You Whole?

If we are talking about a phone number, a maple-bacon doughnut (don’t knock it ’til you try it) or having only 50 cents in your pocket at the Dollar Store… probably not. In any of those cases, you’re gonna need the entire thing.

On the other hand, if we are talking about the ES or the NQ it’s quite possible that a half may be even better than a whole. Half a gap, that is. The half-gap’s simplicity is really a beautiful thing and it sets up some very frequent and consistent trades. So what is a half-gap, exactly? It’s just half the distance between the previous RTH closing price and the current RTH opening price. You’re dubious. Seems too easy, right? Read on…

Both of these instruments love to tag, roll around on and (dare I say it) caress the half-gap (HG) line. Many traders focus manically on the gap fill, and in doing so they fail to notice how important the half-gap level is intraday. The HG level is very frequently in confluence with another important level, such as a IB, range midpoint, daily pivot or Fibonacci level. When evaluating a potential level, I look for confluence. Said another way, when the half-gap lines up with market structure I’m often lining up to trade it.

The HG line is something I’ve been drawing manually on my charts for quite a while now, and it’s been on my list of features to add to the Acme Volume Profile for some time. Well, it’s finally available in the Deluxe Edition.

Unsure? Want more? Here are several recent examples from both the ES and the NQ.

Let’s start with the ES on 8/19. Often the levels price conspicuously rocket through are just as important the levels at which it bounces or pauses. Notice how price behaved in the morning, and then returned to probe and then back-test the HG line: 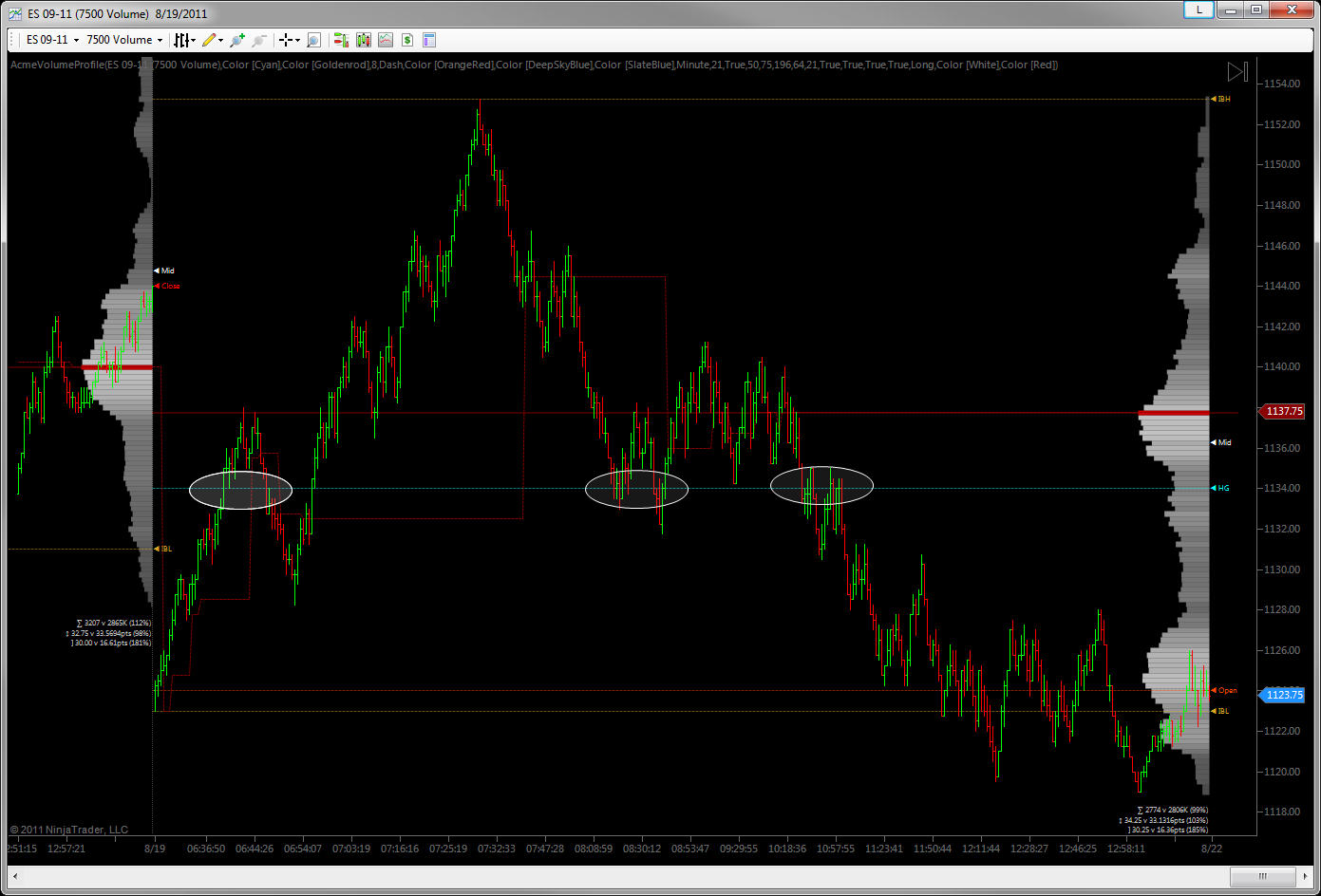 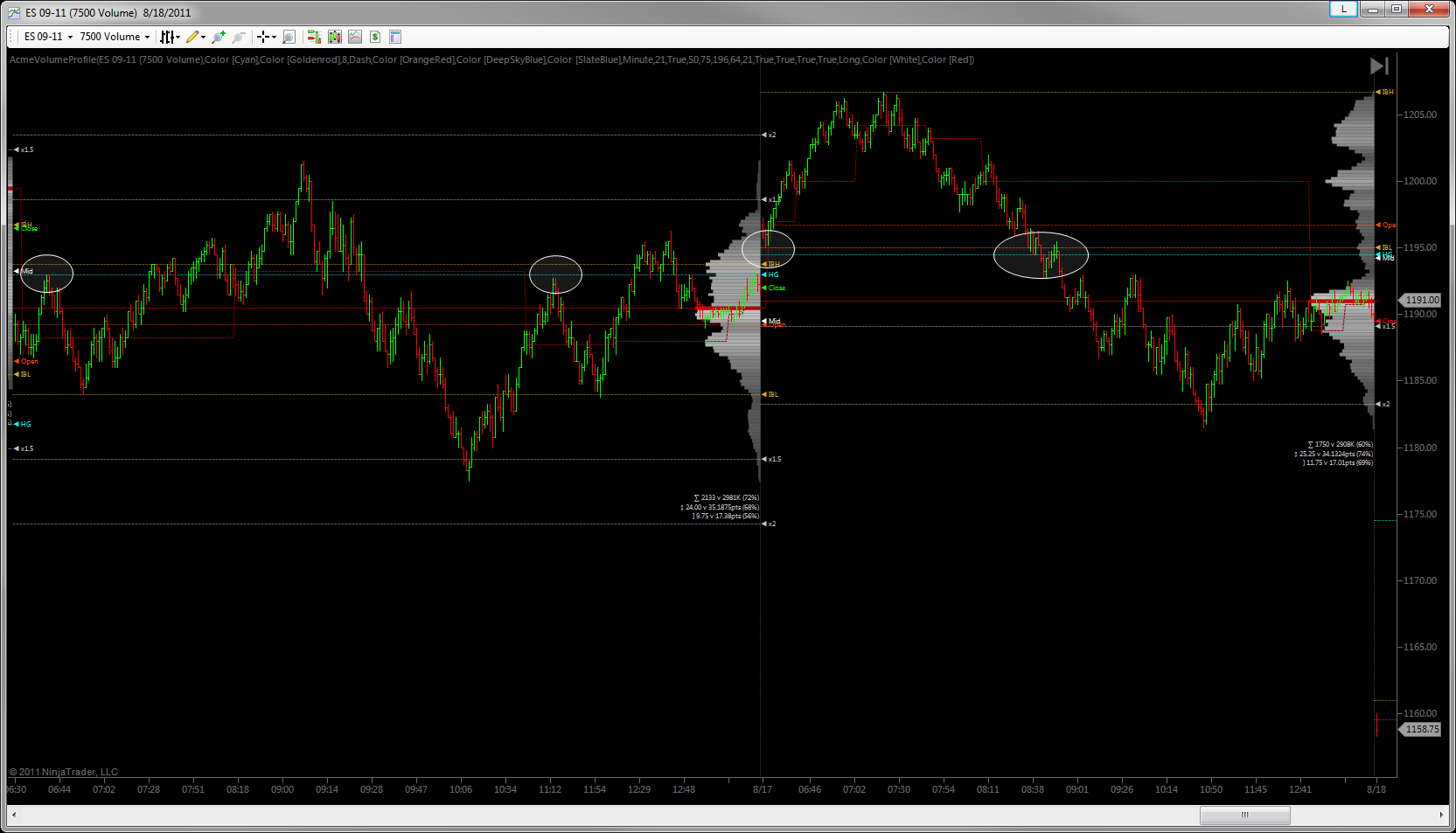 Final ES example, this time from 8/5. This is the kind of caressing or “flirtation” I was referring to. Several probes of the HG from underneath, then a failure and race down to the VPOC. But not before a back-testing the level… twice! 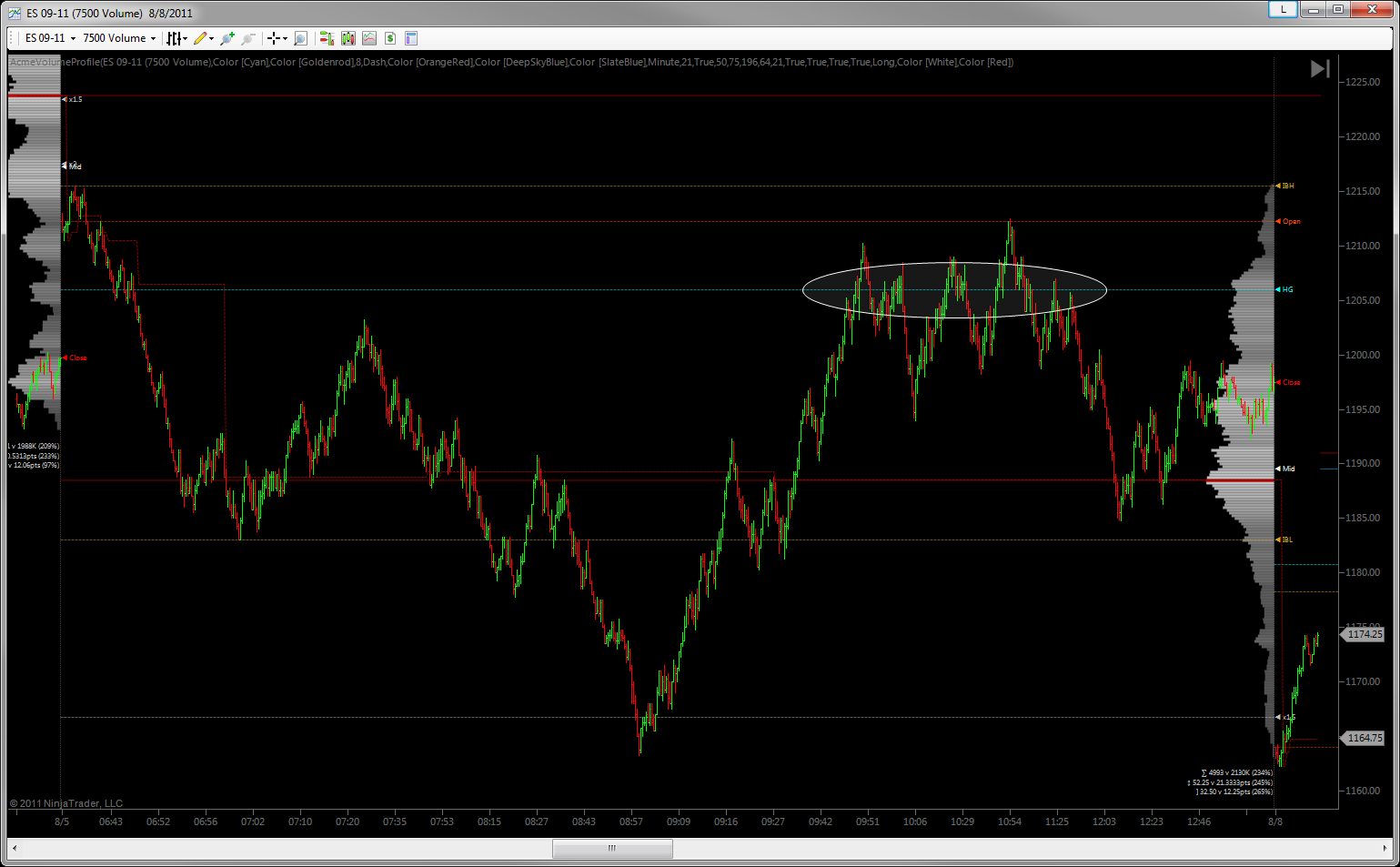 “What about  the NQ?”, you ask. I’m glad you did because I have some examples for it too. On 8/19 again, we see a similar behavior to the ES with a race-through early in the day and a followed by a double-tap in the middle of the session: 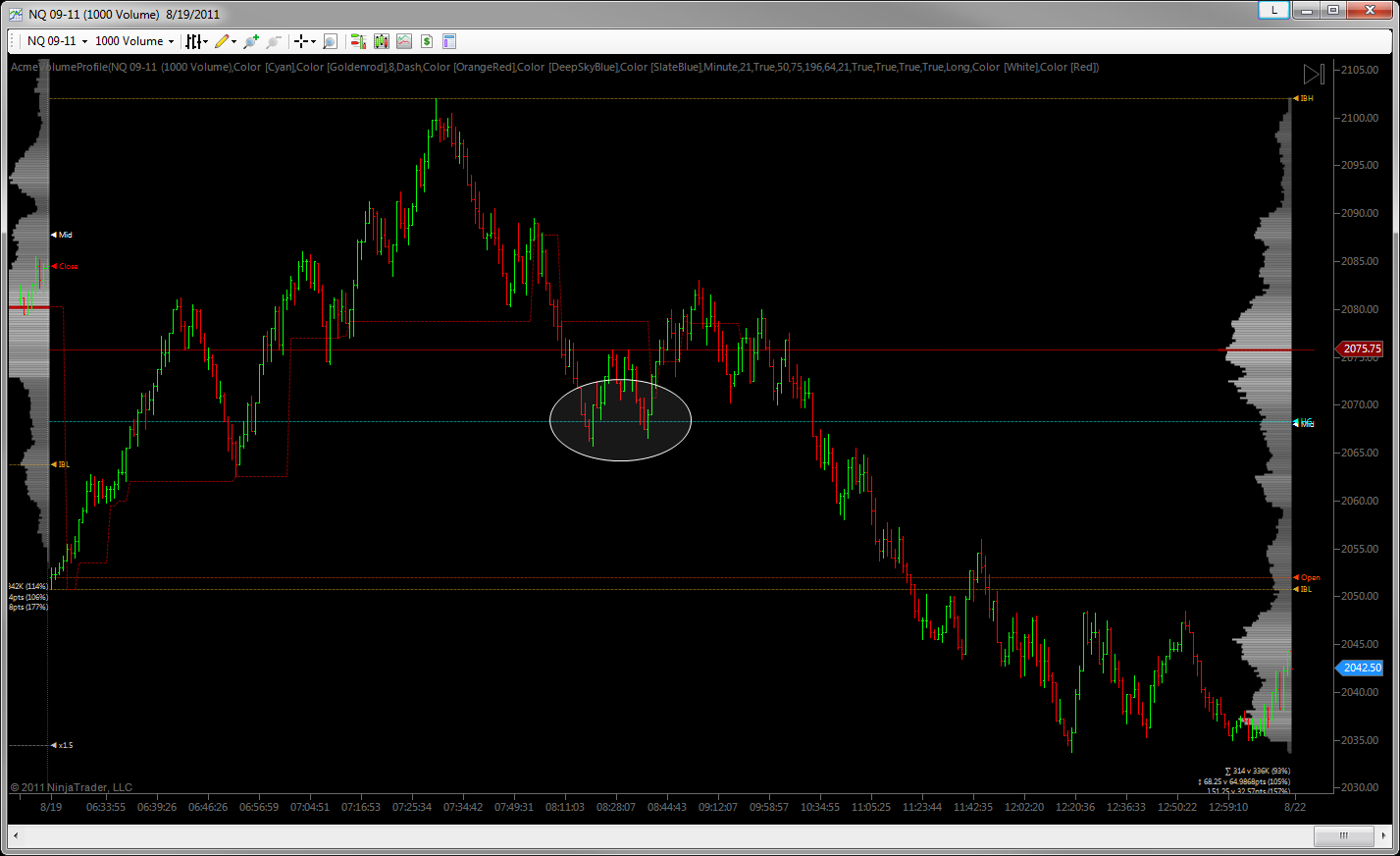 Then on 8/11 and 8/12 we have a nice clean reversal on the morning of the 11th, and follow up on the 12th with the shoulders of an ugly inverted H & S pattern resting right on the HG level: 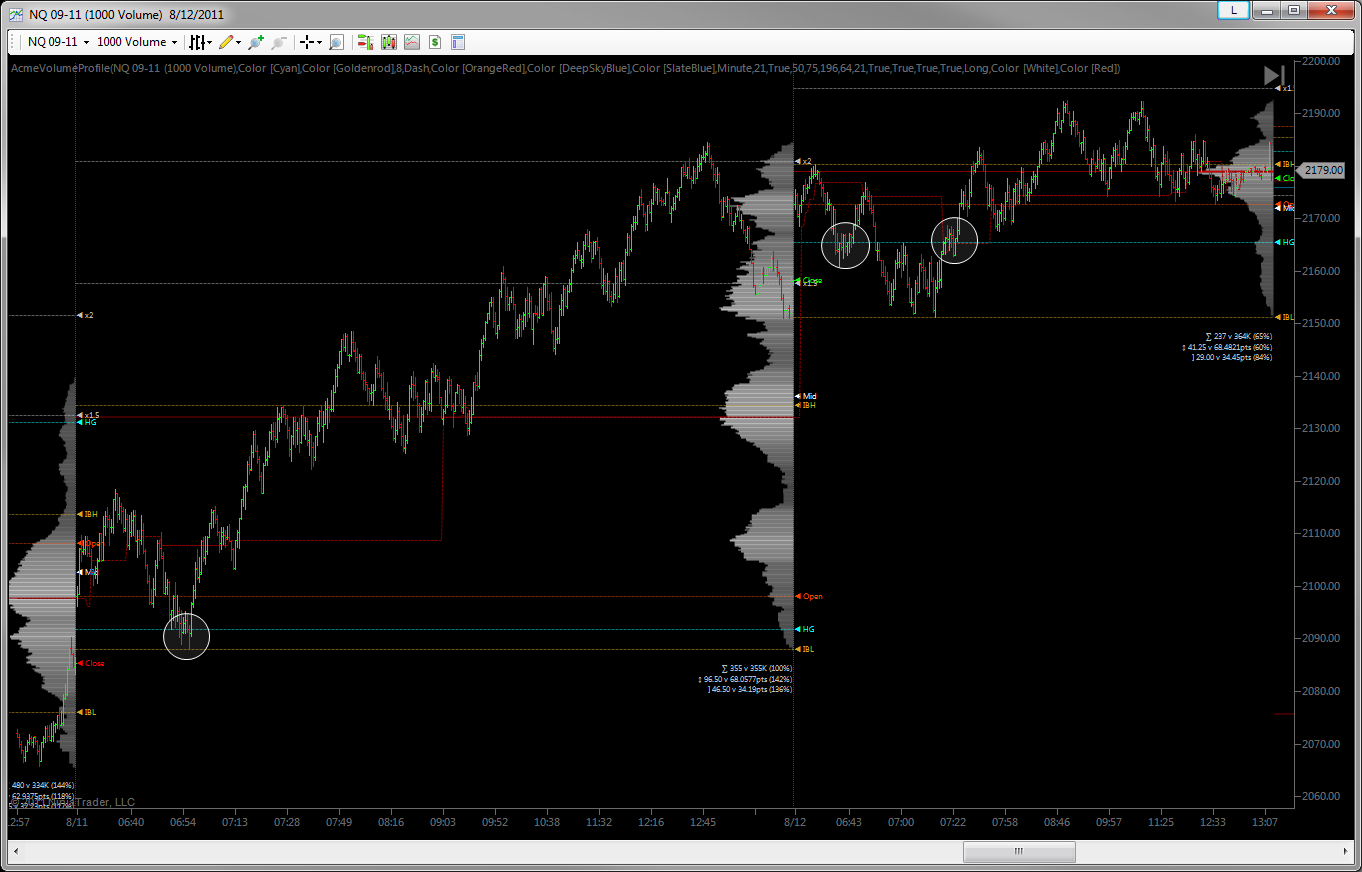 And our final NQ example from 8/9. Here we have another very deliberate-looking morning bounce off the HG followed by a pierce, then pause then headfake-backtest: 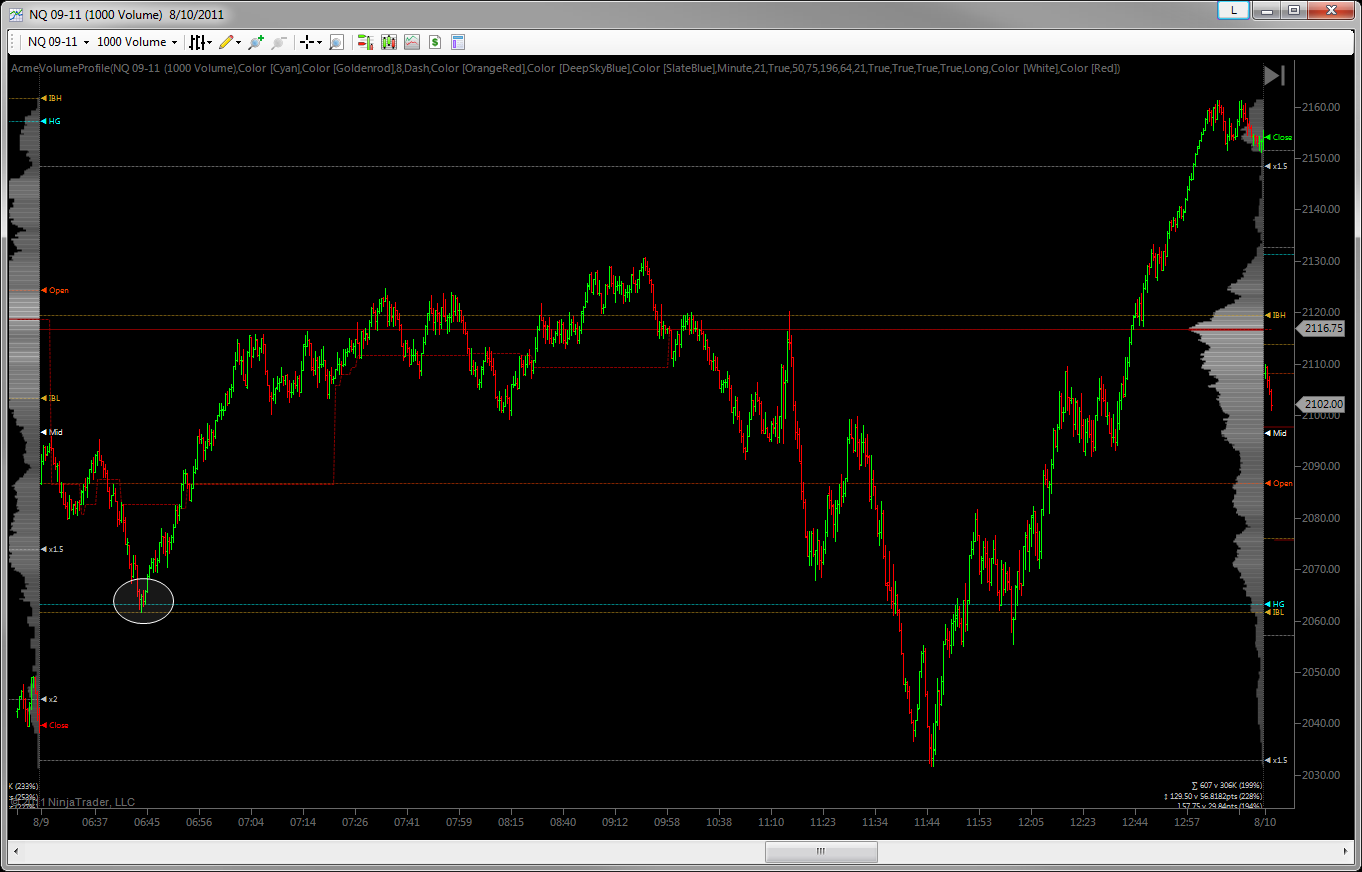 Draw it yourself or let the Acme Volume Profile Pack (Deluxe Edition) do it for you. But don’t reject the half-gap. It can give you a “Whole Lotta Love.”

Trade ’em well… should be an exciting week.