Editorial Note: This is the second part of what could be an open-ended series. If you folks out there on the interwebs find it useful, I’ll post further installments from time to time.

If you missed Part One, be sure to read it first. There’s some important background info in there. It’ll add some depth to what comes next.

While the DTSP™ explained in Part One is a subtle but simple order flow pattern, the ES Toilet Paper Toss (TPT™ for short) is more complex, develops more slowly and must be assessed in the context of multiple days’ worth price action and sentiment evolution.

Why do I call it TPT? Well, to me, the chart it forms looks just like a punter who stole a roll of TP from the restroom and chucked it out over the crowd at a rock ‘n roll show:

Get it? Yeah, figured you would.

Kidding aside, today was a good example of a TPT kind of day: 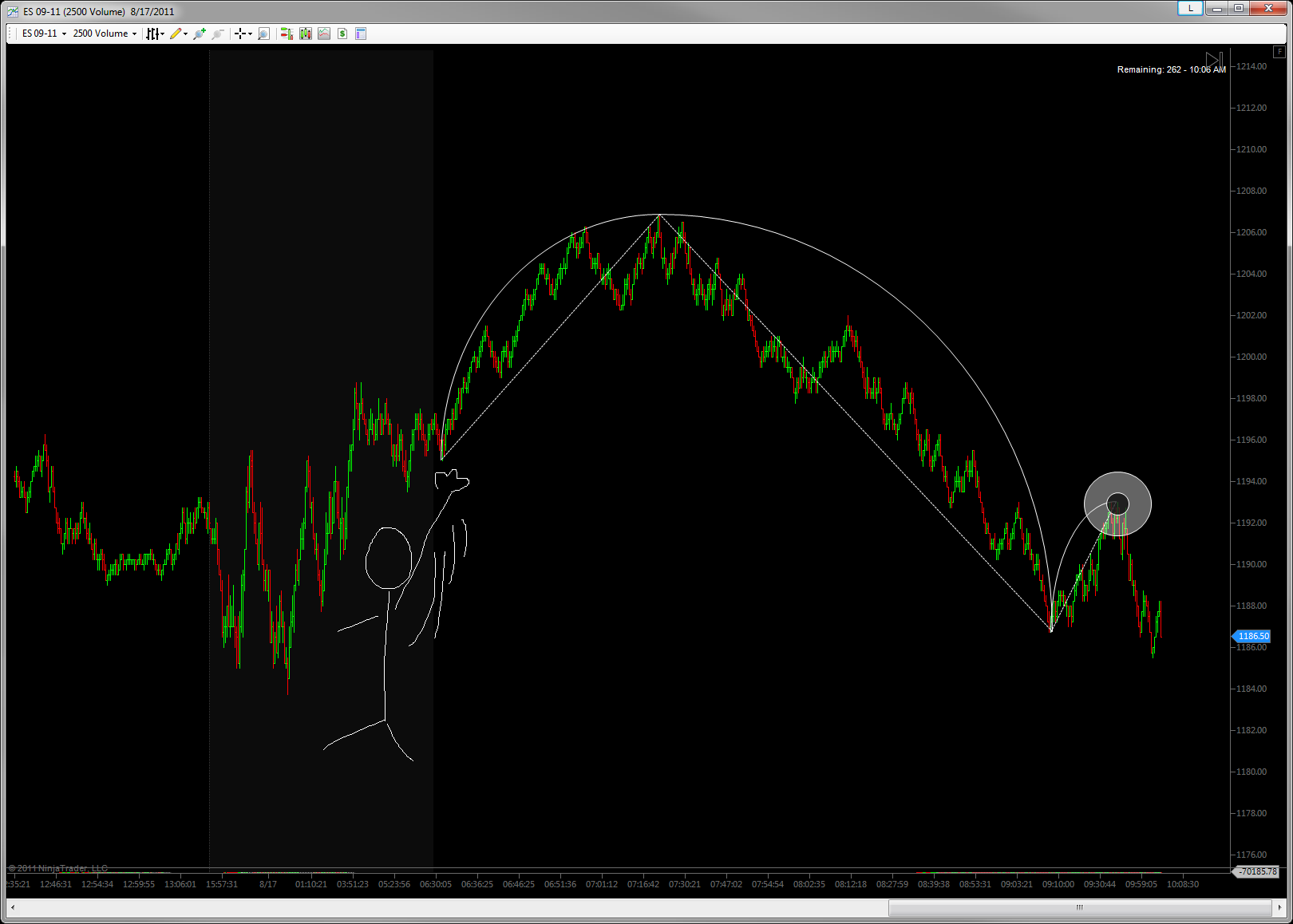 Before going further I am going to wax on about market context a little as I am taking a giant step in complexity from Part One to Part Two. And with this pattern the stakes are considerably higher. If you’re saying “ugh. just gimme the goods,” then skip a couple paragraphs. The details are down there. I won’t be offended. This is more about me than it is you. I need to know I said it, as I have no idea who is reading this. Just how I roll.

Context is everything. I don’t think anyone should make a trade (act on a pattern or “setup”) without understanding the context in which it has formed. If you put on and exit a profitable trade and afterward your inner monologue that goes something like “damn, I’m not sure how that worked, but it did!”, and next you try to dismiss that vaguely distressing thought with something like “who cares? we’re in the money!” Stop trading right now. Yes, now. Close your DOM. Invest some time in studying price action, volume action and learning the contextual psychology of the market.

It’s true, the market does what it does, and often there’s no way of really knowing why. But it’s not random. Fact is, what it does, it does pretty consistently. Sometimes even rationally. That’s the real Holy Grail of trading IMO. Understanding and accepting that the market behaves. Behavior is the manifestation (expression) of psychology. Understand the psychology behind price and volume action and even sudden market movements begin to appear less random, a little more rational and a lot less threatening. Even the ones intended to deceive (of which there are many). You may not like the behavior. It may not like you. It may not be what you expected. But if you are capable of internalizing and accepting the in-the-moment market psychology then you also have the tools to find your way along the behavioral trail that led price to where it is. Market behavior expressed in price action, in this case then, is just a long way of saying context. Context is your friend. More importantly, I think contextual fluency is your only real edge.

How do you become contextually fluent? Time and true curiosity. Start by watching and absorbing, not trading. I believe that you can’t really learn while you have risk on. It’s not a character flaw, it’s biochemical. Risk on time – time in a trade – is tactical. It’s about execution, managing your position and requires great focus. You just can’t engage your strategic (contextual) brain centers at the same time your fight or flight brain centers are active. Sun Tzu knew many centuries ago that the time to win a war is before ever engaging your enemy. So don’t try to outsmart or shortcut the ancient master.

Here are the contextual elements I look for in a potential TPT day:

Here is where a cumulative volume study such as the Acme Volume Breakdown can help you confirm what you think you are seeing in the price action. What I look for, once again, is the harmonious conversation between price action and volume action to begin sounding a little discordant. For example, here is what that conversation sounded like around 7AM PDT on 8/17/2011, right at what would become the IB high: 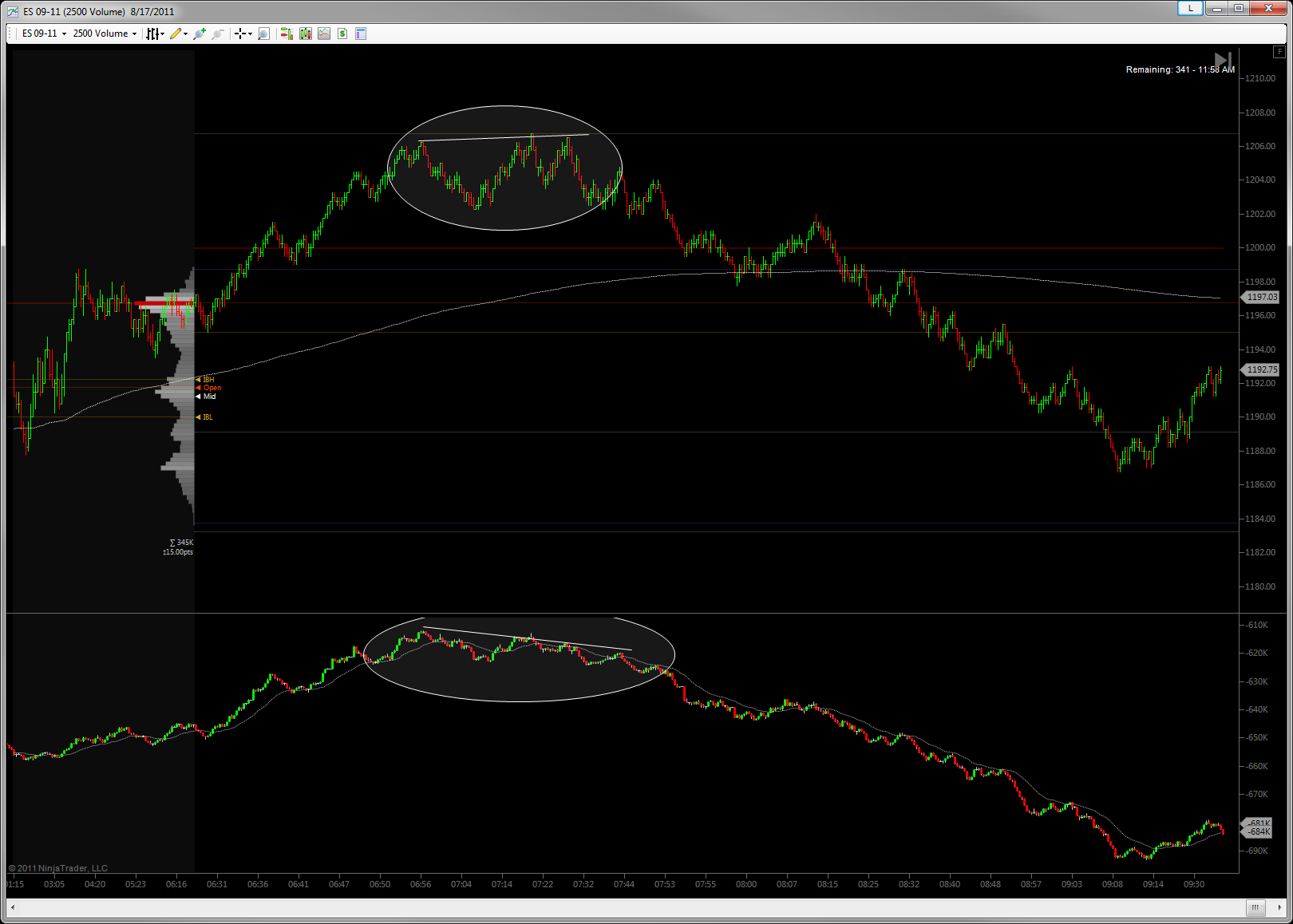 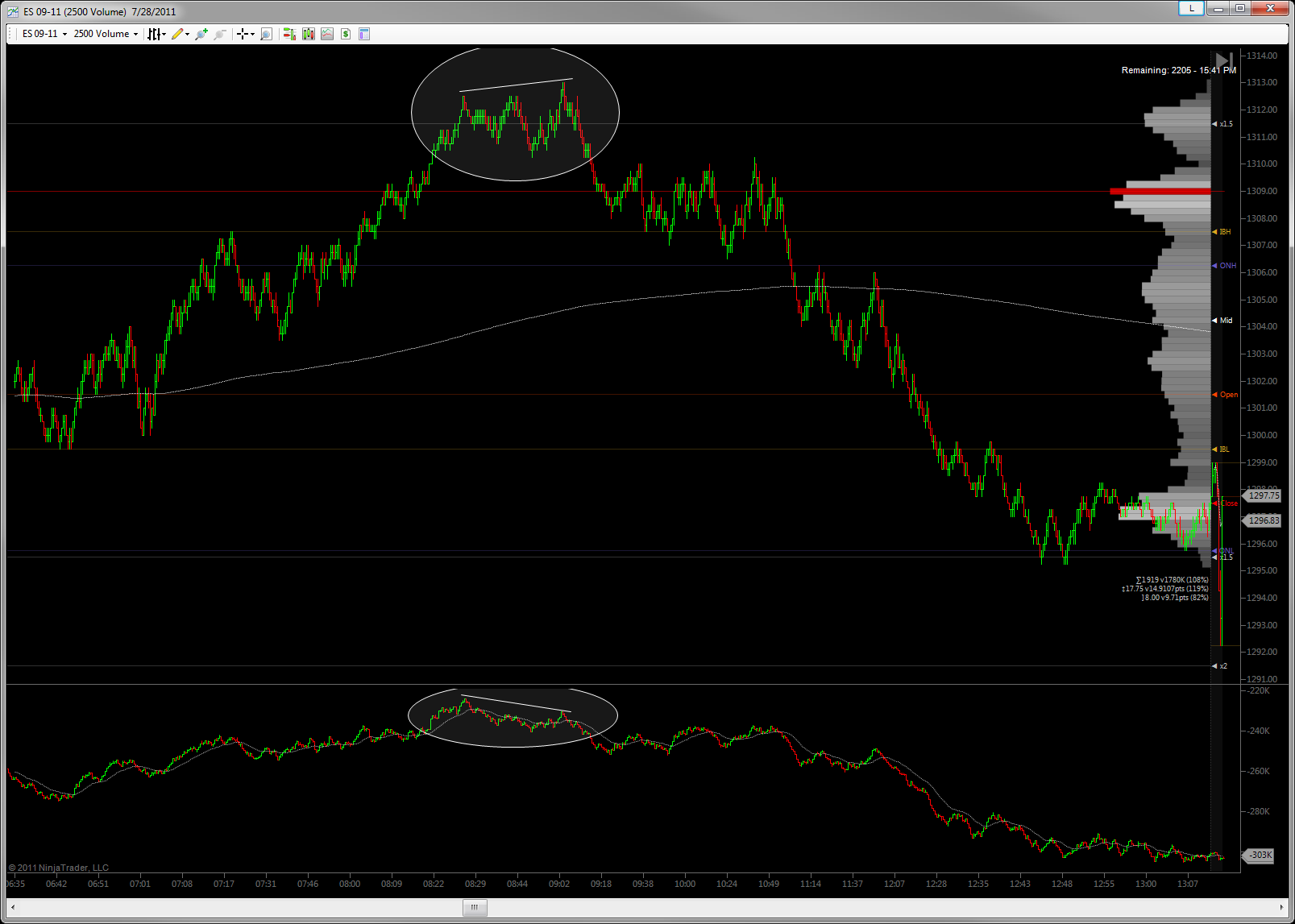 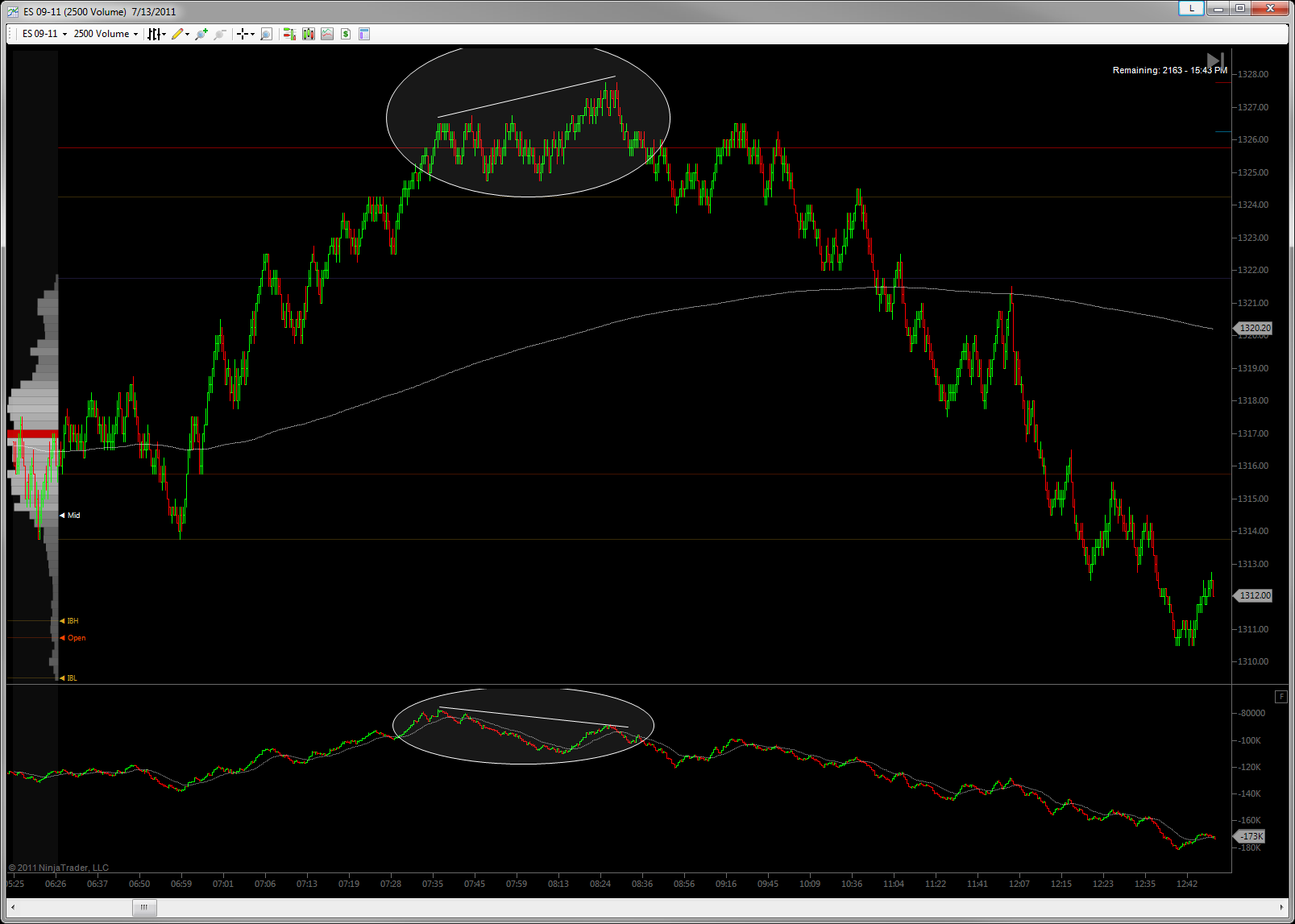 Check your intraday charts and see if you can spot something similar to what’s pictured above on other days too. Afterward, then, zoom out to the bigger picture and examine the price action in the context of the days which surround them. Can you see the elements I listed above? Once you recognize a pattern, craft a plan to trade it. Win the war before entering the battle.

When Price and Volume Disagree, Part One Time vs. Ticks: You Make the Call
Scroll to top