NOTE: If you missed parts one and two of the series, it might be helpful to read them first. Don’t worry, I’ll still be here when you get back.

If you are old enough to remember Schoolhouse Rock, then you already know that three is the magic number. Well, so it is with this post. I think that number three in the series may be the most thought-provoking to date. But it is kind of long, and there is no reader’s digest version. For some, it’s so technical that it might be cracklin’ dry. I apologize. The next post will be more entertaining, I promise. But if you’re the kind who is really interested in the how and why, I think it’ll be worth your time.

The AVB uses a less orthodox strategy of measuring and accumulating buying and selling pressure, so I thought it’d be useful to lay out a day-by-day, apples-to-apples comparison of the way the AVB does it against the more traditional strategy of breaking down and accumulating only volume traded at the bid or the ask.

But first some background. Philosophically speaking, I don’t think you can be the best craftsman (trader) you can be without really understanding why your tools were made they way they were and when to use which tool for what job. So with that said, here is the essential rationale for the Acme Volume Breakdown’s strategy:

Before I get further into it, I’d like to point out that the approach the Acme Volume Breakdown uses is available in other software as well. At least two of the most popular futures charting packages give you a choice between bid and ask and uptick/downtick evaluation strategies. I’m not claiming anything revolutionary,  I’m simply showing you why I think it’s the best fit for listening in on the price-volume conversation.[/box]

If your volume breakdown/cumulative delta relies on the kinds of non-deterministic factors described above for quantifying buy and sell pressure, it’s a virtual certainty that you’re not getting all the right information at all times.

On the other hand, using upticks and downticks is completely deterministic.

Unless the ticks themselves are fed wildly out of order from the exchanges (and they are are time-stamped to the millisecond or less so they can be properly re-ordered at any step along the path), or the reported volume is incorrect, there is no theoretical way for buy or sell pressure to be incorrectly quantified.

The rules of the strategy rely only on information available in the tick stream itself, and are about as simple and as robust they come:

Now, finally, on to the comparison I promised. Below I’ll compare some of the more interesting aspects of ES RTH sessions from last week, August 29 – September 1, 2011. 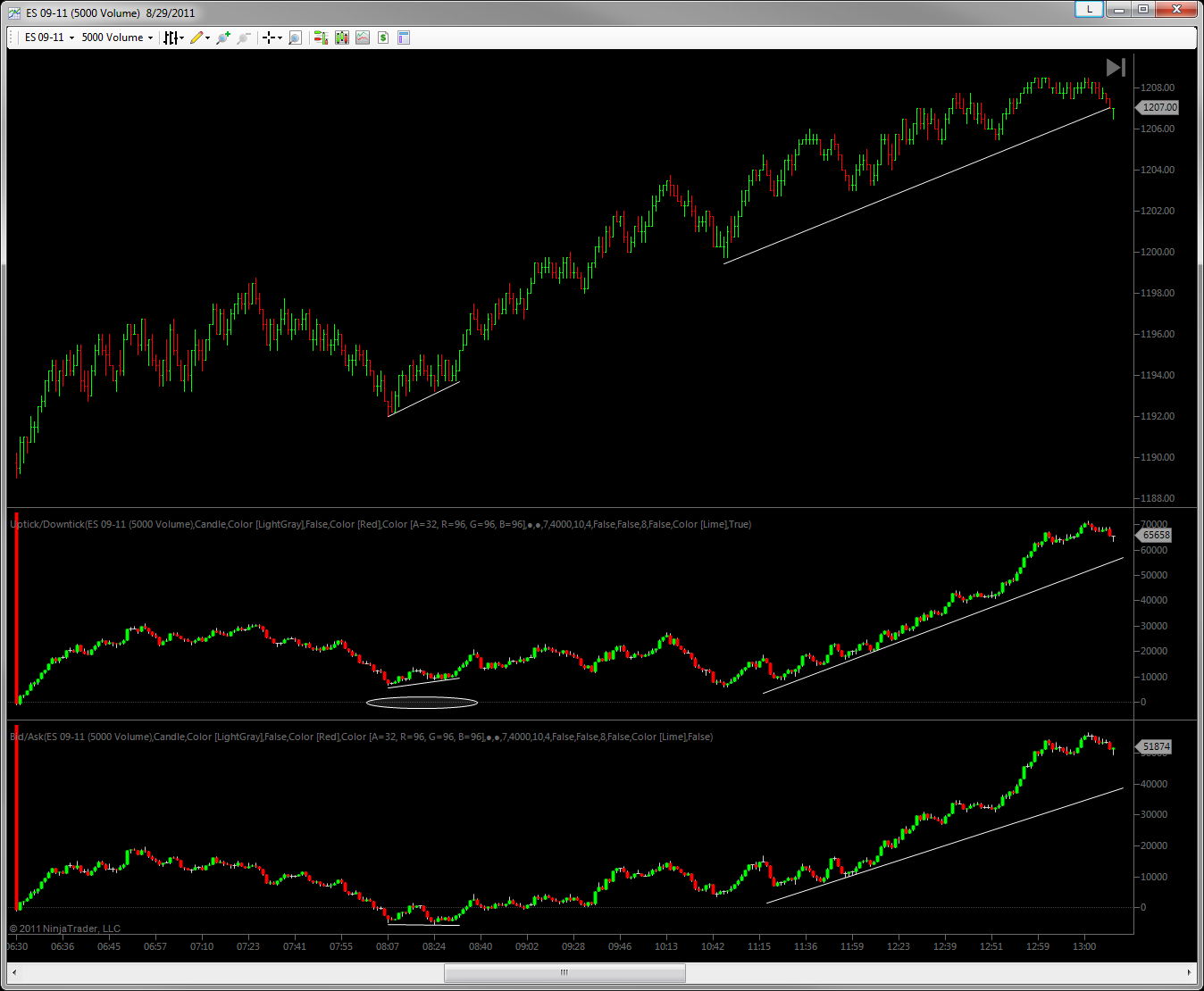 Commentary
To my eyes, the up/downtick strategy gave a more prescient view of the day as it developed. If you paid attention to the zero line and and the bid/ask’s interpretation of the price-volume conversation around 8:30am (the Pacific time European close is a common head-fake point), you might have gotten short. And that would have been the wrong choice.

On this day both strategies finished with a positive delta. 65.5K for the up/down tick version and 51K for the bid/ask version. Less than 15K difference between versions on a day which traded about 1.6 million contracts. That’s a difference of about .9% of the volume of the day. Further testament to the assertion that almost all volume on this day was traded at the bid or ask. If it was otherwise, the differences in overall shape and the final delta (on this day at least) between the two approaches should be substantial. But they’re not. So again, if it’s almost all traded at the bid/ask why treat it as special?

Tuesday, another up-trend day, saw a ~25 point move up on about 2.2 million contracts: 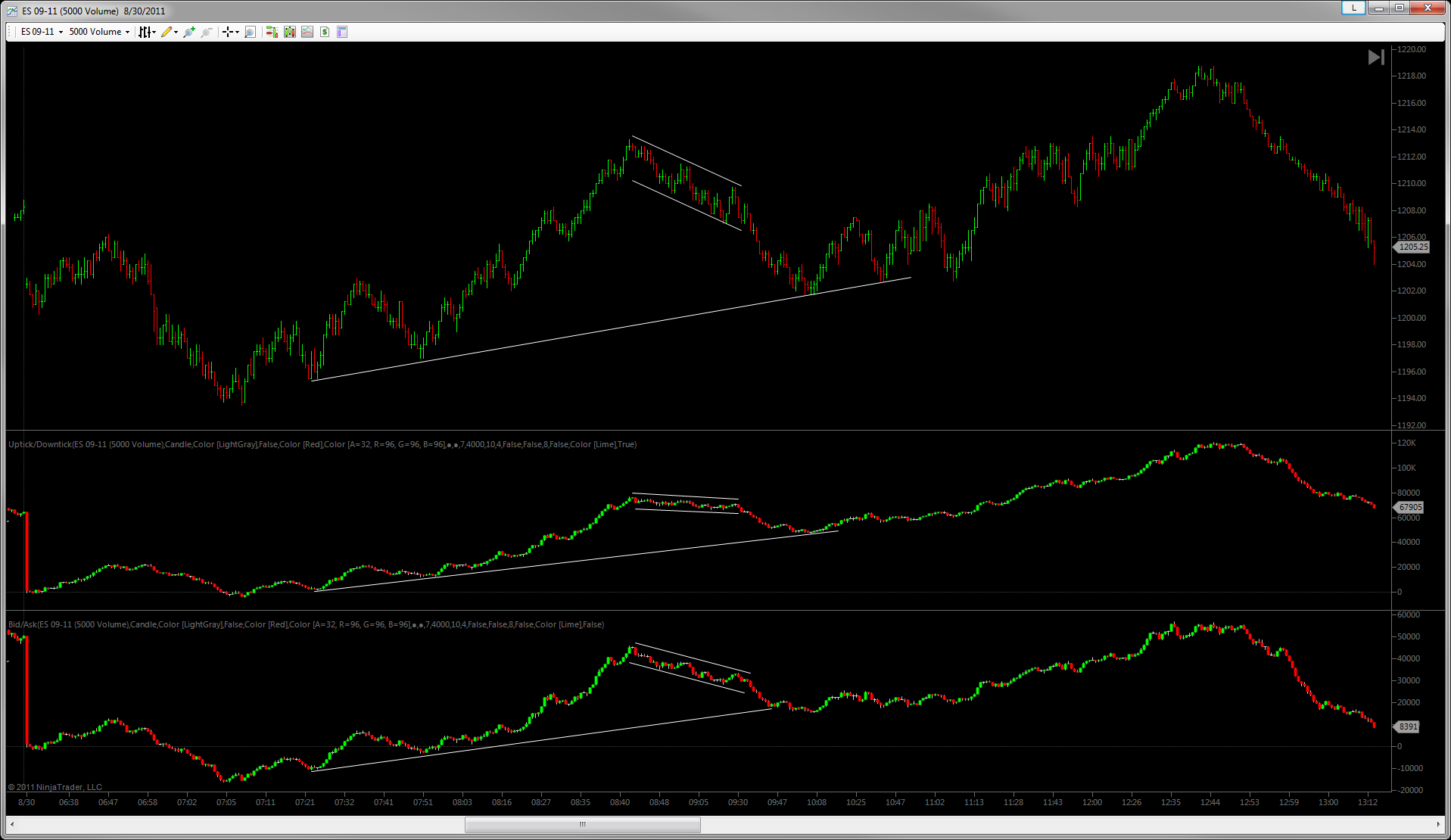 Commentary
On Tuesday the bid/ask version displayed greater potential to mislead if you are a trader who pays attention to the zero line. The sub-zero dip may have suggested weakness – a classic ES head fake tactic – when the real intention was further buying.

And again, the up/downtick breakdown gave you valuable insight during the 8:40 – 9:30am selling. Had you been watching the bid/ask breakdown, you might reasonably expect further selling. However, the up/downtick version’s price-volume disagreement alerted you to the strong possibility of underlying strength and revealed an imbalance of intent. Had you listened to the discordant conversation, it could have kept you short small, or not at all, and kept you stalking another long at a level where the price-volume conversation became harmonious once again.

Lastly, while the delta difference between the breakdowns seems substantial at about 60K, that’s really only about 2.6% of the day’s volume.

Wednesday was a neutral day which saw trading of approximately 2.8 million contracts on a range of 22.25 points: 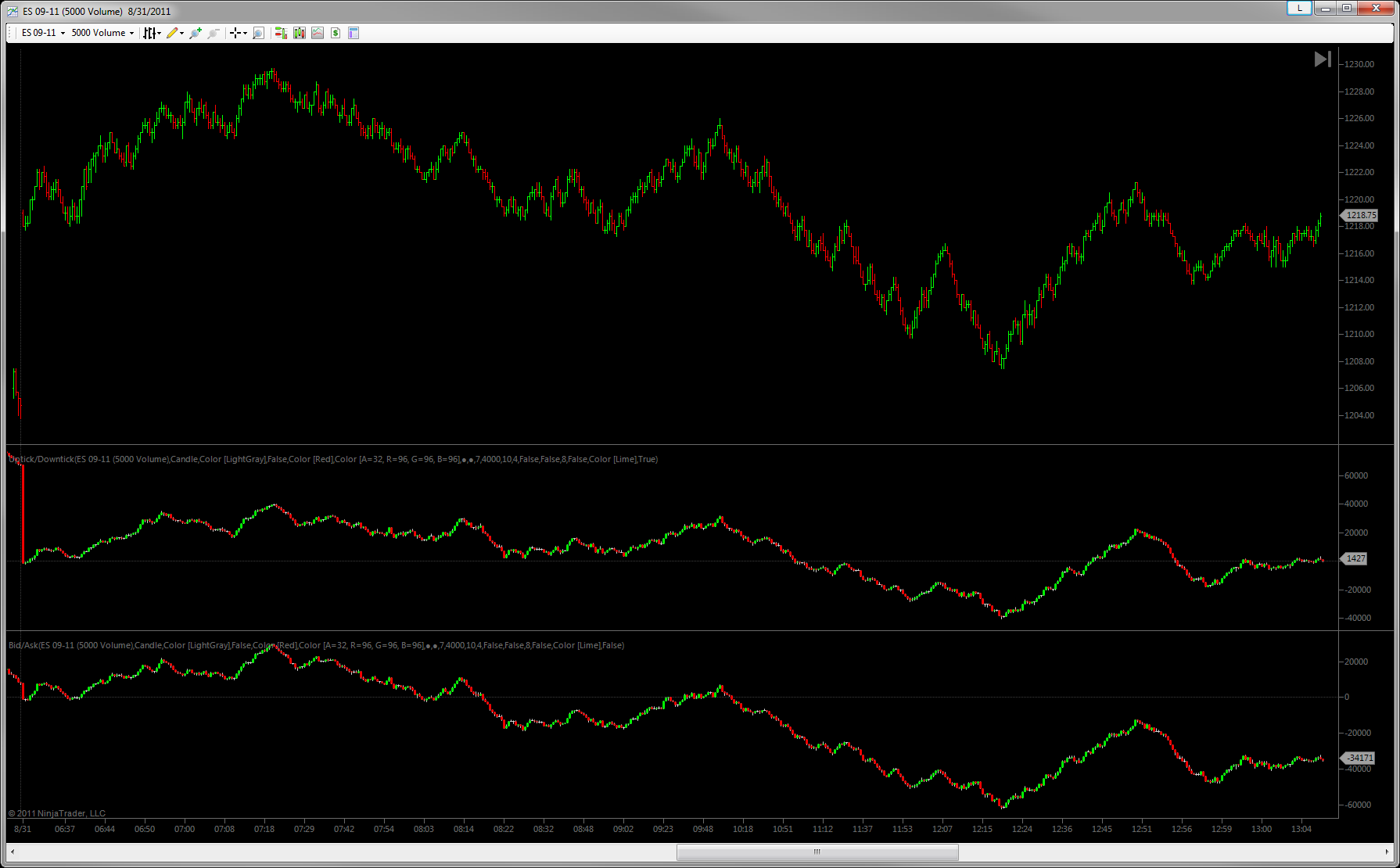 Commentary
Frankly, this was one of those rare days when absolutely every technical measure was singing the same tune. What does this mean? Well, typically it means there was genuine price discovery occurring. Both buyers and sellers were present, active and had real, dissenting ideas about fair value. Most importantly, neither were dominant enough to engage in head fakes of any kind. Wednesday was exceptional for it’s lack of exceptions, if you see what I mean.

Thursday was a solid, steady down-trend day with 2.3 million contracts traded in a 28 point range: 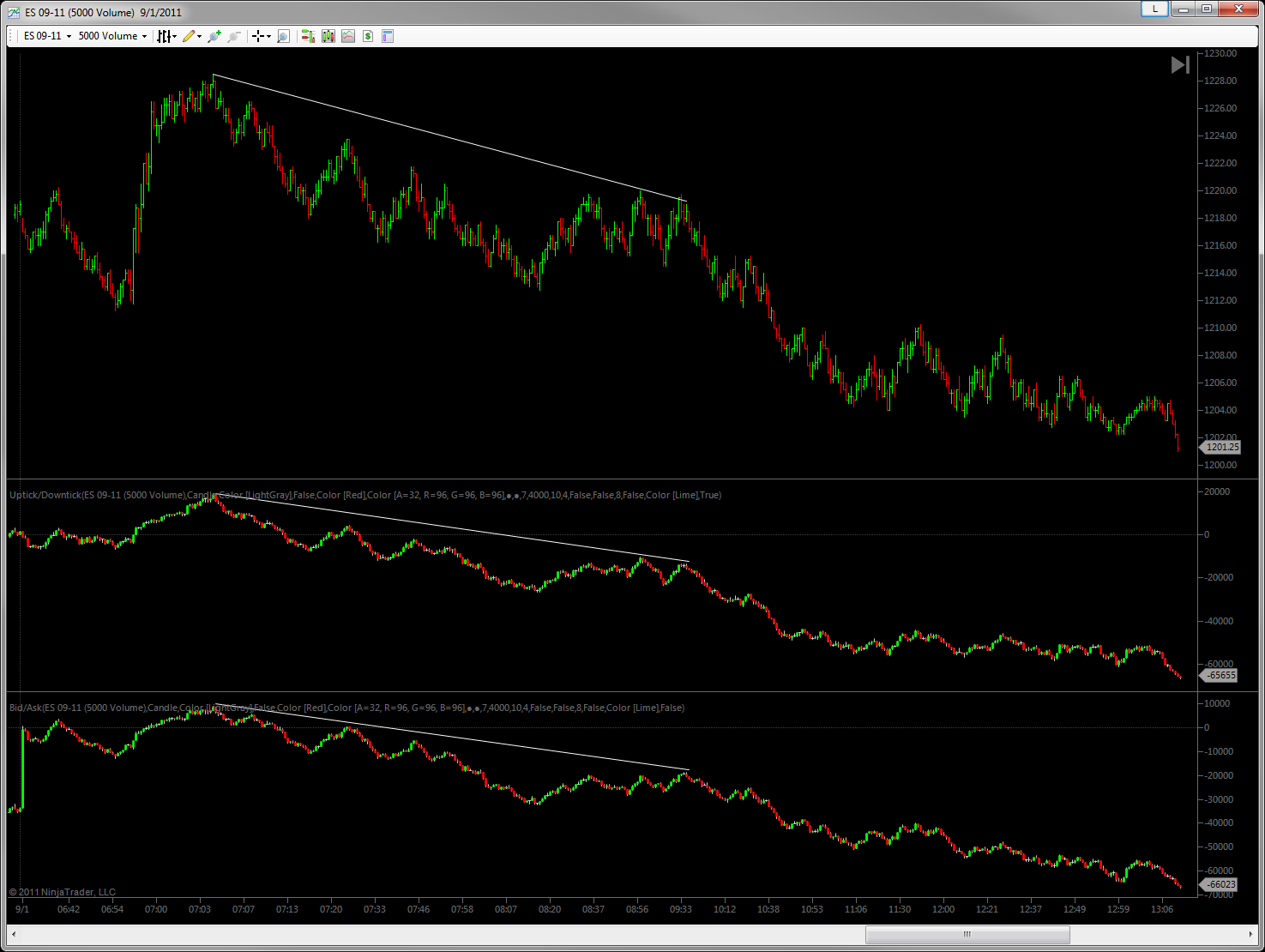 Commentary
The take-home (dead horse?) message here is that closeness of the final deltas again confirms essentially all volume on that day was in fact traded on the bid or ask. So, again, why treat it as special?

I hope this head-to-head comparison has given you some insight into why the Acme Volume Balance and Breakdown Pack and the Acme Volume Impression Pack use the strategy they do, and perhaps even challenged your thinking a bit on what is the “best way” to view and interpret price-volume action.

Moreover, hopefully I’ve laid out an understandable rationale and provided something of a fresh perspective. It’d be great if you agreed with my assertions, but it’s OK if you don’t. There are many, many ways to view a market. Eventually you have to find your own. And maybe I didn’t say anything you didn’t already know.

But if you did learn something you didn’t know before… how will you use it improve your trading?

What’s in a Name? When Price and Volume Disagree, Part Four
Scroll to top

These cookies collect information that is used either in aggregate form to help us understand how our website is being used or how effective our marketing campaigns are, or to help us customize our website and application for you in order to enhance your experience.

If you do not want that we track your visist to our site you can disable tracking in your browser here: