Blog
You are here: Home / Blog / Patterns / Trading for Value, Part One

And now for something completely different.

I’ve posted a lot over the last few months about patterns and contexts where price and volume disagree. Today I am starting a series on what I (and probably others) call value trading. Basically, it’s the flip side of the auction coin. It’s about when price and volume work together – agree – to tell you what might happen next.

This way of looking at price and volume that is not suited for all instruments on all timeframes. As the series progresses, a plethora of examples will appear. But for now, suffice to say I think that value trading tends to make the most sense for instruments that have inherently mean-reverting tendencies.

Value, in this vocabulary, is a statistically-defined range of previously accepted prices.

This is also known in TPO and volume profiling terminology as areas of balance. Now, lots of folks try to trade for value using moving averages of various lengths. There are really a few drawbacks in this approach, in my opinion:

So what if you could use volume as a kind of real-time, non-lagging “test” for the veracity of price action? What if the range of statistically-defined, previously accepted prices could be overlaid on a chart? What if – at least for some instruments with value-reverting tendencies – you could use this tendency and these statistically defined ranges to trade against? What if you had a chart that distilled most of the most important principles of volume profiling (namely identifying unfair prices)?

Well, if you’re still reading then I’m going to guess you’re interested in some answers. I don’t know that I have the answers, but I do have some example charts to show you that illustrate the points above.

Now on the chart I’ve circled all the instances where price touched or breached the 2nd standard deviation and then reverted to the same day’s value area or the previous day’s value area in the same session (or immediately after the open of the subsequent session). 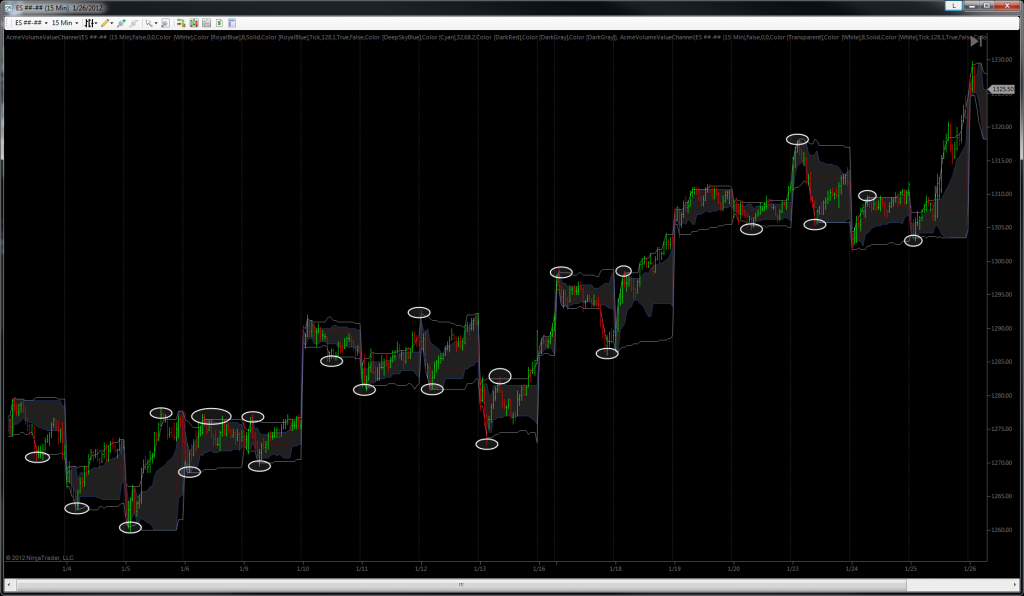 Closeups of the Big Picture

This type of value reversion happened 22 times in 17 days, under pretty sane/normal market conditions. It’s not a coincidence. It’s the market doing its job, re-testing previously accepted prices to see if buyers or sellers are still interested.

What I like most about this chart is its simplicity and consistency, both visual and conceptual. We are leaning on volume to help us gauge the “truthiness” of price (yes, I am a big Colbert fan). And I think one of the ways to become and remain successful in the markets is finding at least 2 – maybe even 3 legs – to stand on. How long can you stand on one leg? In this metaphor, that one leg would be price averages. You need two to cover any real distance. 3 legs might be even better but let’s keep it clean, amigos. This is a family blog. ;-}

In the simple example above we would have theoretically had a little better than one quality entry per day had we used that and only that to read the auction. Not bad, huh? There will be more examples to come that illustrate this approach to analyzing price action.

So as they say… watch this space.