In the last episode of our Trading for Value series, we saw a couple very interesting charts from our intrepid oil trader Danny. Not only does Danny trade oil, but he’s pretty damn funny too.

He was looking back over a chart from last week that marked a significant near-term turning point in the price of Light Sweet Crude (CL). He was sort of marveling at how clearly the turn was spotted with the Acme Volume Profile Pack studies (high praise, we know… but that’s the point of all this!), and made a joke that it was like the price was just swimming along and a Great White shark came right up underneath it. More to the point, he could actually see it coming: 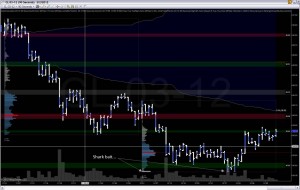 We’ve not heard the last from Danny. One of these days he will show up for an encore presentation, toting more interesting and creative thoughts on trading price and volume.

But today it’s all about Phil. Phil is a Rancho Dinero Pro Member, primarily an ES trader and he’s been using the exact same Acme Volume Profile VPOC study as Danny. Though in a completely different way. The point of this series, after all, is to show some fresh perspectives on using price and volume instead of or in addition to the kind of volume and TPO profiling many of you know so well.

So here’s Phil, ready to show and tell. These are his words and images, essentially verbatim. Without further delay, here is Phil to take it away:

Anyone that uses profiling in their trading will know that the basic theory behind it is that of price discovery. Profiling is a great aid in helping determine levels of interest as it clears up much of the noise that may be missed by the just looking at the chart. In profiling theory price discovery rotates between balances which can usually be found by looking for the low volume nodes that surround a high volume node in a composite chart. That being said, something I have found to be of use is the application of this same idea down to the micro level.

One of the tools in the Acme suite, the AcmeVolumeProfileVPOC, allows you to see clearly where the majority of volume is being transacted per period in your charts. In my experience I have found that once you have determined your levels of interest (be it through a composite or simple support and resistance) you will want to have as much information as possible for you to make a decision whether to engage or not at those levels. In my trading I use a combination of divergence indicators to determine selling or buying pressure at this point and combine that with the AcmeVolumeProfileVPOC to see where the volume was done. Whether I am looking to fade a move or enter on a pullback, I want to see that a vpoc was created around this level and that the price action is showing clear rejection of the vpoc in the way of continuation or a counter move. Once this happens I look to enter in the desired direction on the retest of this vpoc which usually happens in the next or within few bars after. In some cases the retest is very quick so like anything in trading you have to be ready to jump on the opportunity when it presents itself.

In the example below I use a 5 minute chart to explain what I mean:

2)      As you can see also from these charts, 1308 and its surrounding volume nodes were bought and rejected the price drop during globex into the RTH open.  In the 5 minute chart with the VPOC indicator you will also see that there was a vpoc on a wick of a clear reversal candle. This in my book means price got to that level and sellers were absorbed by enough buyers to be able to stall this move. As a result we knew saw a small bounce from this level into this open.

3)      Once the RTH session got on the way, we saw a retest of this vpoc at 1307.25 to the tick where buyers came in and a prepared trader could have bought at first sign of stalling or rejection (or however you determine whether or not to engage), with minimal risk (stop below the lows) for a possible bigger pullback of the globex drop to a previous area of resistance which in this case happened to be around 1313.50 where we saw congestion on the way down.

As you will see there are many other examples on this chart and as with anything in trading, it requires you be curious and try it out for yourself however I believe the vpoc tool will help you identify areas which are likely to be retested for a rejection and/or continuation with defined risk/reward parameters. 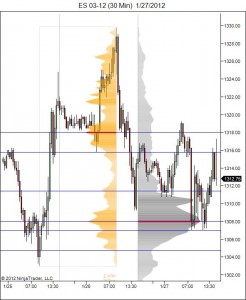 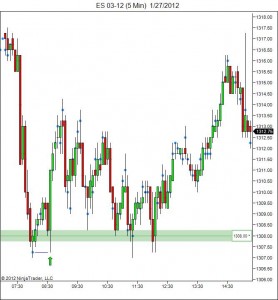 Again, amigos, this well is proving to be deep, clear and mighty refreshing. We’ll be raising another bucket before you know it. And if you like what Phil had to say or you have questions, be sure to leave a comment. No doubt he’ll be around to appreciate and answer.

Until next time, trade ’em well…

Yep, It’s Still All About the Data
Scroll to top