I really never do this. I mean do my weekend homework out loud. But there’s so much happening, or about to happen, if nothing else I feel like I need coalescence my thoughts with some writing. Here goes…

So now that OPEC has decided to play their hand (probably last real hand of cards, but that’s another post) and raise the stakes in the oil game I thought it only fitting to watch There Will Be Blood 4 or 5 times in a row. Daniel Day Lewis blows me away every time.

With OPEC’s decision the stakes have moved from monetary to existential. It’s not only about price per barrel but about whether certain governments will be able to afford to maintain their status quo going forward. Venezuela is an obvious one, Russia certainly a most important other. Over the weekend Russian oil men have been saying “Da, veee can leeve wit zeextee doular oil.”  But what else would they say? If you watched any of the Sochi Olympics you know the unofficial Russian national motto is “Don’t be a pussy.” You have to expect a non-flinch.

But in my view the door’s been opened to all kinds of unintended consequences. As of late I have become a ravenous student of WW1 and of WW2 in particular. WW2 is an object lesson in full-frontal, all-in existential gamesmanship and in the impacts of unintended consequences on plans put in motion by all sides. So many small, unpredictable events happened to each sides’ plans along the way which had an out-sized impact on the actual outcomes. If you have a couple hours to kill and you’re interested in this subject, a concise way to see it animated is in the movie Tora! Tora! Tora!. In my view the energy markets are a new kind of modern war, and right now OPEC has just decided to (metaphorically) bomb US/Canadian oil’s Pearl Harbor. Watch the movie. You’ll see the parallels, methinks. There will be a reaction.

I think the most pressing question the WTI market must answer Monday and Tuesday maybe is whether there are any longs left to muck their cards. We saw an outsize range on Friday and the highest one-day volume since 2011. But the question on my mind is whether the margin clerks were able to reach all the (big) clients they were too timid to summarily liquidate. Put another way, was this significant enough capitulation to see some interesting upside soon? 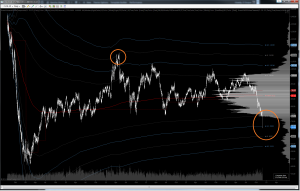 My read says not just yet, probably. But on the other end if you are wanting to take delivery of some crude oil early next year (or need to hedge low and long), there has never been a better time in the last 4 years to buy! Buy! BUY! with both hands. This kind of buying would likely rebalance the market over the next few days (at the bottom of the long term profile balance area above). If the actual crude consumers are pretty well stocked up short term they’ll wait and we’ll know it. In the intraday time frame there are enough growling, salivating speculators participating to shove this contact around pretty easily and wildly. So unless those other time framers come ready to party there’s not a lot of doubt in my mind we’ll test the $60 mark. This happens to be about the 2x standard deviation of the long term VWAP from July 2008 (shown above). So not only would that make the range almost poetically symmetric, there’s some Fibonacci confluence around there too. That handle is also close enough to the lower 1 sigma implied volatility range I tweeted  a couple days ago to be very plausible. If the OTF-ers do show up to take control and/or a pile of late shorts need to cover, the Thursday low of 67.75, 70.00 handles are clear targets/points of potential resistance and within 1 sigma implied volatility strike zone too.

Here’s one other interesting chart I thought I’d share. While I am only a small-scale farmer who does not lock in or hedge against energy prices, I find it interesting to look at the relative performance of oil versus several natural resources and agricultural commodities which, in general, take lots of oil to produce and bring to market: 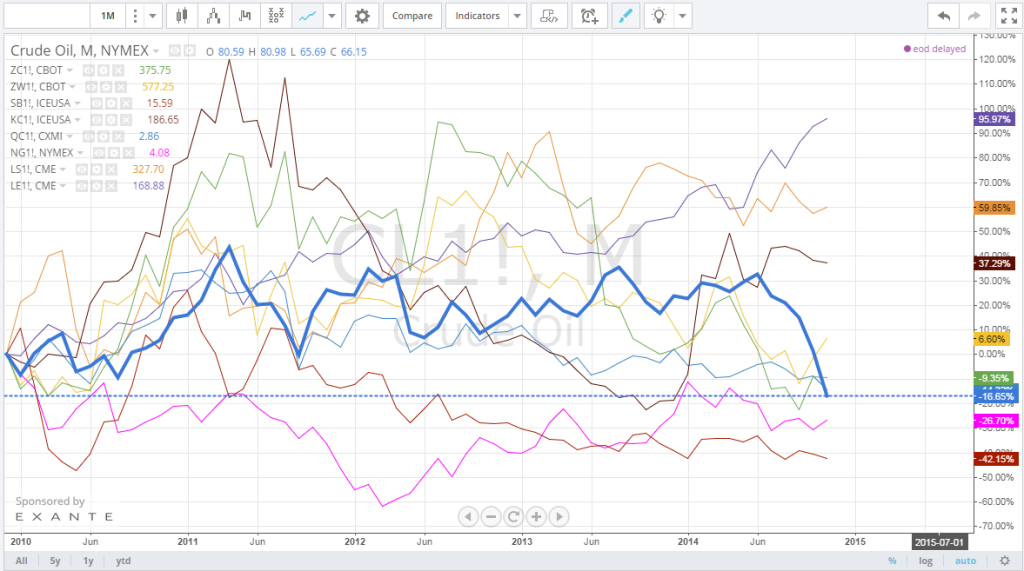 Seen this way, WTI has pretty much reverted to the mean and then some. This is in general bullish for producers and transporters of everything else (sans natural gas, I guess). So I’ll see your barrel and raise you a bushel.

To the Spoos and Beyond

This has to be the most dispised rally of recent memory. Longest period of closes above the blah blah SMA blah blah. The Honey Badger Market don’t care. (S)he just don’t. All the destruction discussed above has in no small measure created this monster below: 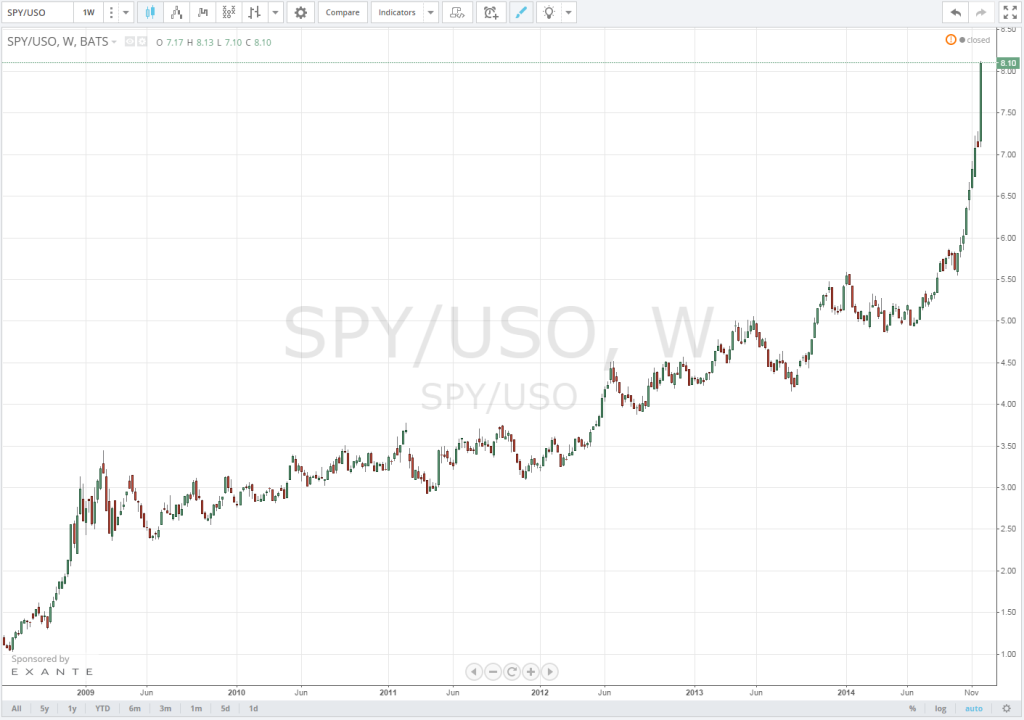 So you can’t love the short WTI trade and hate the long SP500 trade. It’s totally irrational given this kind of correlation. But now it’s gone vertical, Top Gun style. Supersonic. There are multiple bogies on the 6 and I think we all know what happens to parabolic moves. This move will probably be – at least in the shortest of terms – somewhat self-governing given the recent brutality suffered by the SP 500 energy sector. This sector makes up over 8% of the SP500 (as of Nov 28), and the big ol’ bear flag and Friday’s price action says there’re more grisly candles to come: 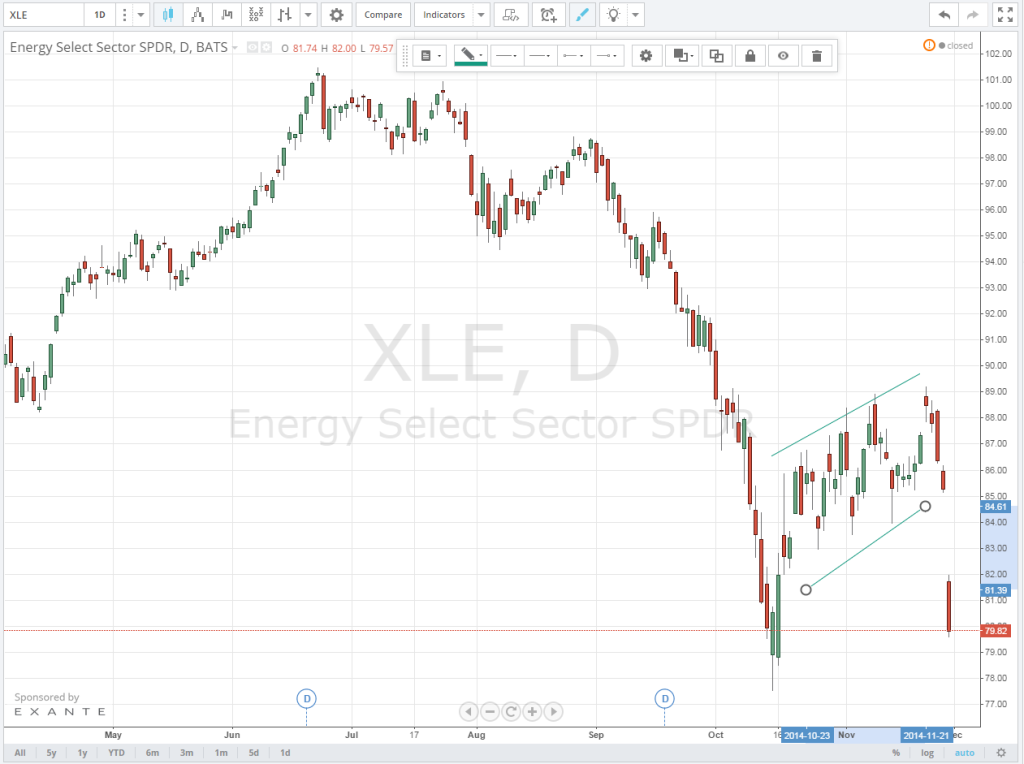 Despite the weakness in energy and (to a lesser extent) materials, the other itsy bitsy sector spiders are still crawling up the spout. 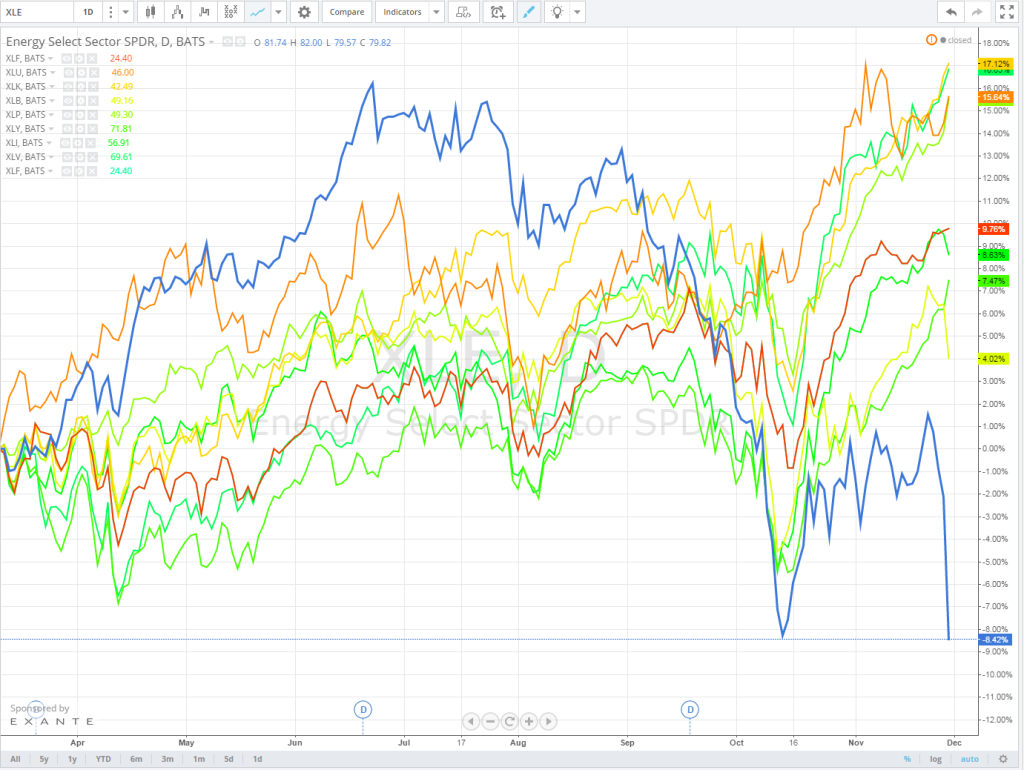 You can see some of the above sector weakness (and possible sector rotation appearing) in the momentum and advance/decline indicators: 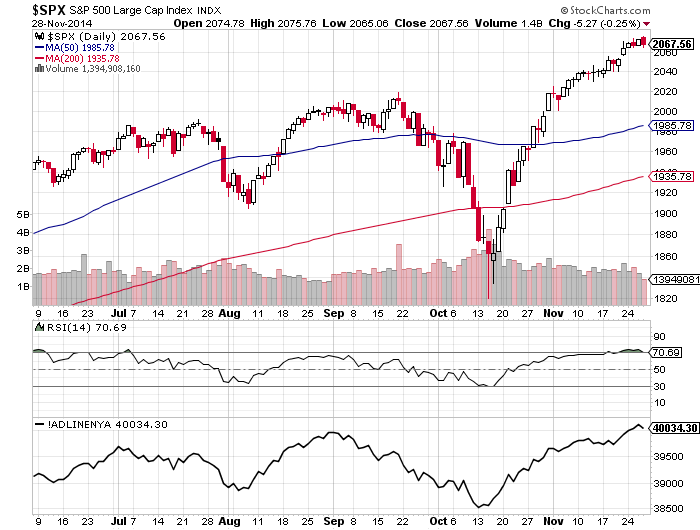 So it would’t be a surprise to see the beginnings of some sector rotations here as well as some additional margin calls in the large cap energy sector which I’m thinking will mute at least some of the ES upside for a bit. Black Friday retail sales news flow will begin in earnest Monday as well and it remains to be seen what offsetting or accelerating effects this might have. All that said, we have several nearby branches on the ugly tree to be hit, should we fall off: 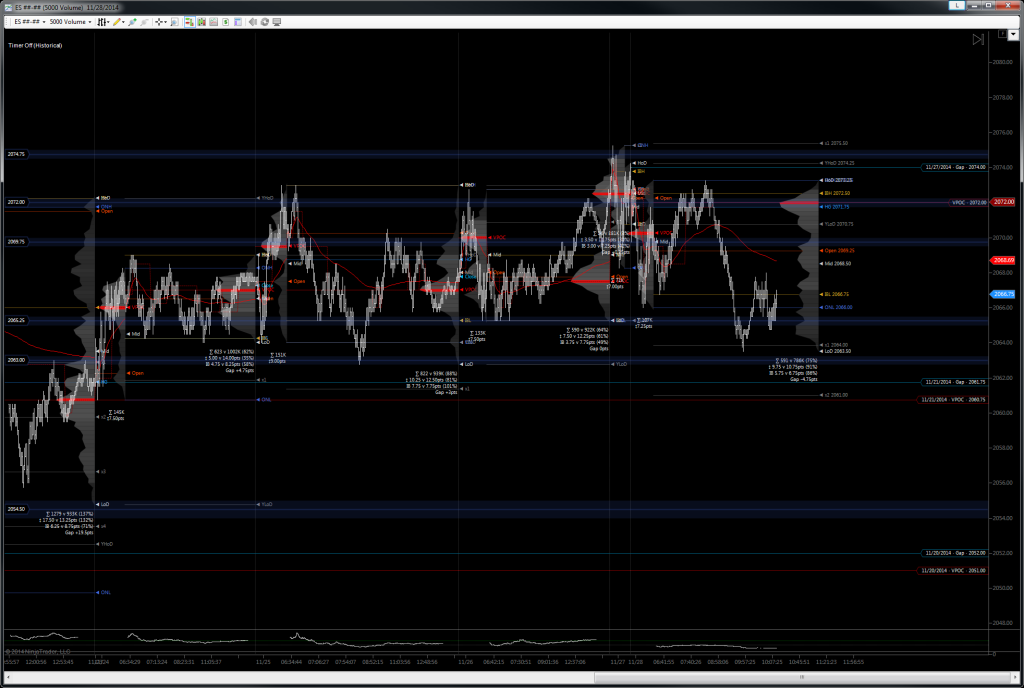 Given also that we have a pregnant b-shaped balance from the holiday week (not shown) the most interesting prices, again given the way it looks right now, are the gap and VPOC below at 2060-61 and another pair down at 2052-51. Any more below that and I’ll look for a retreat to the 2036 composite HVA/balance/Nov 20 support area. To the upside we have 2 holiday week VPOCs in the 2072 area as well as an open gap at 2074 and a 2075.25 ON high.

But I’ll wait to see the overnight session then decide how I’ll play my cards for tomorrow.

Listen up cowpokes because it’s on. Again!

We don’t do this but once in a blue moon. So why now? Well, recently we looked into the night sky and that big bright orb circling our planet had a distinctly azure tint. Or it could’ve been the bourbon. Can’t remember. Anyway the point is we’re offering the best deals on memberships you’ll to see in quite a spell.

So grab your rope and toss your lasso around these deals before they get away. Because after December 7th, they’re gone for good…. 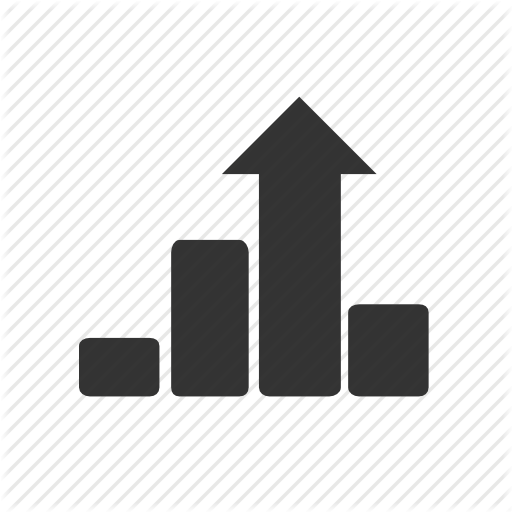 A fresh batch of data for the long-term initial balance (IB) breakout study has just been run and written up. It’s always illuminating to see how the market morphs over time. And it does. Sometimes imperceptibly, but always inevitably.

Want to know what’s changed? Have a look here…