Blog
You are here: Home / Blog / Patterns / Just Dropped In to See What Condition Our Condition is In 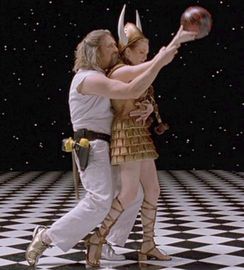 Why yes, the title of this post does refer to the surreal dream sequence in The Big Lebowski. Sort of fits where we’re at in the markets at the moment, doesn’t it?

The big volatility continued, of course, lubricated by global monetary liquidity on the one surface and the picking of multi-billion Euro nits between Germany, Greece and the ECB over Greece’s fiscal woes on the other. All this left many a trader confused and frustrated when sell-side programs took the opportunity to whollop the indexes not once but twice this week, seemingly out of nowhere. These hits came just we were getting comfortable with the idea that no, the SPX’s 6th test of the 150d EMA was not, in fact, indicative of weakness in the equities market and that the bull party may be winding down. 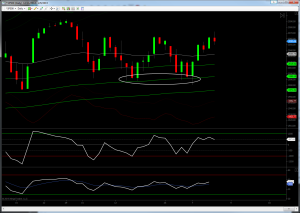 It was just the opposite. Turns out the glass was half full and your gracious host was standing over your shoulder, ready to top it off before it even left your lips.

Of course I’m only joking. Fact is that as a short term trader, especially in the futures markets where up is just as good as down, you survive and thrive via adroit use of mind and DOM. Still, I think it’s useful to take stock (get it?) in where we’ve been in order to help visualize where we may be headed. And to help make mental room for possible strikes and gutter balls, maybe even all at once in the same frame.

So let’s look at how we did, starting with the US large caps and working our way down.

The thing that I think has to jump right off the screen at you, 3D movie style, is that both the small caps and midcaps were able to at least take a peek above the year to date resistance. The midcaps not only peeked, they were able to bob up out of the deep water and spend a session or so with a dry head. Of everything I see on my charts this weekend, this has to be the strongest argument underpinning the expectation that the SPOOs and NQs have potential to continue higher. On the other side, the fact that none of the indexes were able to close above this same resistance is compelling fodder for a reversal thesis.

So what will it be this week in the SPX? Strike, spare or gutter ball?

At this point, factoring out force majeure, as I’ve been saying for weeks, I believe that the bulls must regain at least intraday acceptance in the 2060s range, and secure that acceptance by pulling the VPOC back up from the 2026 area. This is what’s needed in my view to sufficiently buttress market structure for new all time-highs. Believe it or not, the forceful sell-off on Friday may be just the thing to set that up. Bulls can only build balance (aka fair price acceptance) in the 60s, by buying over some period of time in the 60s area. You can’t do it from higher, like at the Friday highs. Fact is that Friday’s 2053.75 close puts that objective in easy, casual reach, even with a hangover. ;-} 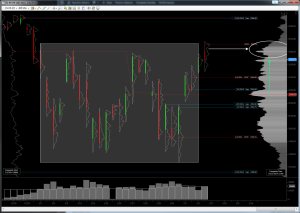 Should the bulls fail to do this, given the volatility we’ve seen, I’d expect us to revisit the 2020s area and possibly even the 1970s area from a week ago. Maybe lower. But again, I think in this environment where we’re on and off the brink every other day, it makes sense to not get ahead of ourselves. All the important levels in the box above are well-known – we’ve tested many of them from both sides, dozens of times in some cases. The only need I think this week is to be ready for responsive or initiative other time frame (OTF) players to step in. Overall, the bulls are in control. Most all the shorts above Friday’s close were likely squeezed out the last several weeks. So bears are the ones who would have to dig in anew. They are side with something to prove, methinks.

Only lightly trading crude oil given volatility in the SPX (my main squeeze) these days, but it’s definitely worth keeping an eye on. On the weekly time frame we’ve finally established a higher POC in the low 51s after endless weeks of driving lower. The profile shows the market out of balance, which means in order to bring itself back into balance and move on we’d need to see a poke up into the 55 area. The fact that we spent Friday at the top of the POC balance area, is constructive for higher prices. 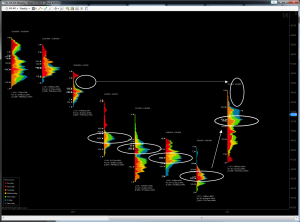 Whether we build acceptance higher is another question, one I’m doubtful of in the short term given the massive oversupply condition we now have. But looking just at the charts this is the most logical course for the auction in my view. I’ll definitely be keeping an eye out for long swing opportunities up into this region this week, via CL as well as the UWTI ETF. Still not much interest in energy sector equity names for the long term. Overall my view is that we’re going to keep bouncing along the 50s and 40s for a time to come. The fundamentals don’t support a v-bounce, at least not yet.