Blog
You are here: Home / Blog / Price vs Volume / Dry as a Bone

Not a ton of time to get creative with the weekly check-in/check-up, amigos. Spring’s here and I have many projects grasping for my attention. So you’ll get just the unvarnished, straight dope this week.

And that’s OK as I see things lining up pretty clearly from both a macro and technical perspective. But I also have to say that the last 2 weeks straight I’ve been dead wrong in terms of my favored directional scenario. 2 weeks ago it appeared we were poised for a rout and instead we rallied. Last week the charts looked poised for a challenge of new highs (post FOMC) and instead it was three days of liquidation with a respite on Thursday and Friday.

So what’s it mean? What’s the point then if you can’t predict what will happen next ?

For my trading time frame and style, the process of idea generation is really the critical thing. When I have 2 logical directional plans, being right in the moral (ego) sense becomes irrelevant. Preparing (for me) means defining a hypothesis, establishing the criteria to test it. If it proves itself, fine. If not, well I have another one already in my pocket. Just switch mindsets and go with it.

When you have the freedom of both directions and a plan for each, being wrong is just as valuable as being right.  Creating a plan with a favored scenario gives me a theory to test. I plan 2 scenarios each week, chose the one I favor based on the technical factors I see and then identify what evidence I need in order for that plan to be trade-able. If the evidence doesn’t materialize, that’s critical information. You can lean on what a market doesn’t do as reliably as what it actually accomplishes.

Now that that’s out of the way, where’re we at? Where’re we headed?

Early this week the most pressing business in my view is for the ES to do some repair (or rejection) of the zone from about 2080 down to around 2065, marked on the chart below. This zone was created during Wednesday’s 40 point liquidation. We retreated to a large area of prior acceptance from 2060 down to around last week’s expected range low of 2038. We hung in there for 2 days, with Friday being a balanced inside/inside/inside day – that is inside prior day range, inside prior value and inside the ON range. Almost without fail when the market creates that kind of tight balance, it’s simply waiting for the right time to ease on down (or up) the dusty trail. 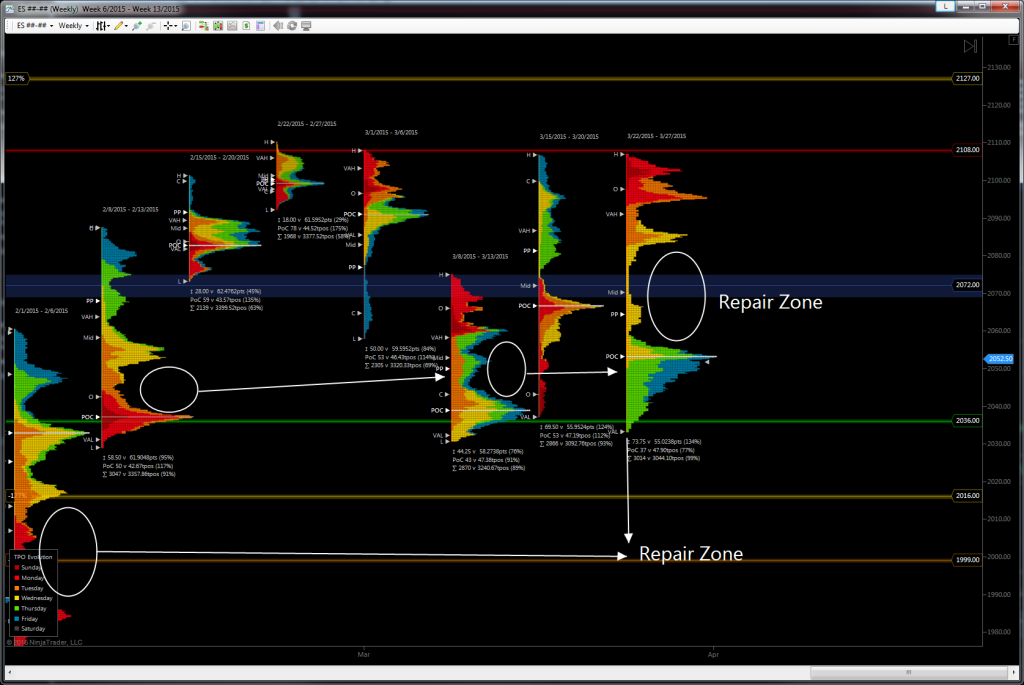 We have a a ton of confluence in the bull/bear zone, including the March VWAP, last week’s VWAP, 50% of the weekly range and the midpoint of my intermediate term trend channel. Plus it’s the closest market structure repair zone: 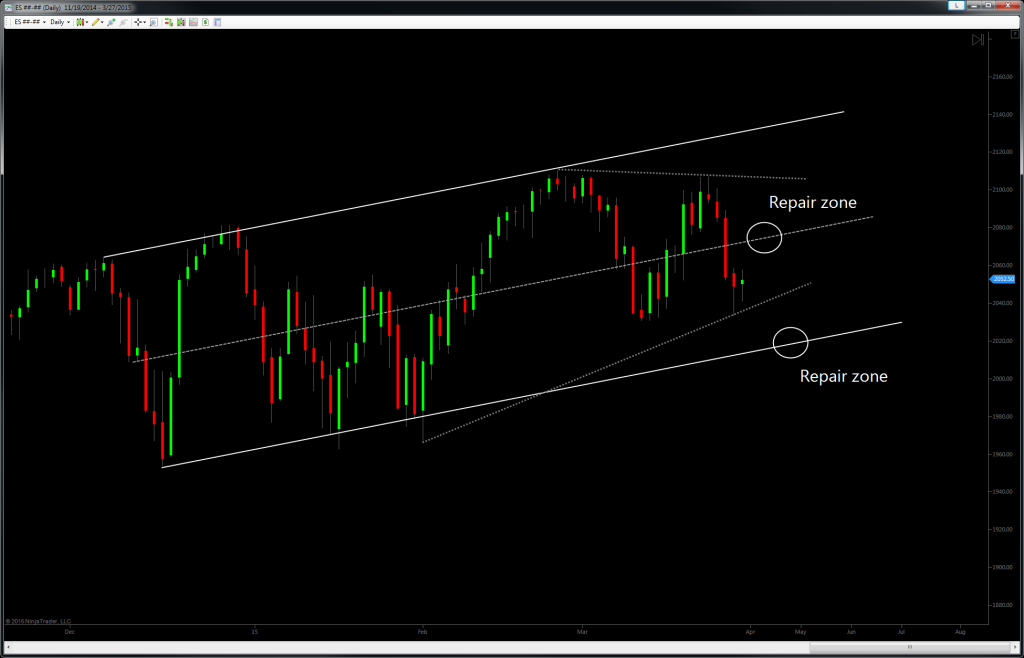 I’m expecting, barring macro surprises, we will spend at least a little time trying to find acceptance in the region shown above. Even if the bulls manage to find a day or two of acceptance, I’m having a hard time seeing how it can hold. The bigger macro picture shows us that we’re in the midst of the Q1 buyback blackout, and the lack of corporate buybacks drain an important source of support from the large cap market. Of course, all stocks are affected by the blackout, I think large caps are fully valued somewhere in here. Recent economic data’s been decent but not blowout and has not given the market much appetite for multiple expansion (essentially valuation inflation, too much money with no better home causing prices to rise).

For these reasons I’m expecting the bears to take full advantage of any selling presented by overweight funds looking to book some profits and clip some risk. Prices seem especially vulnerable to downside pressure now that Q1 has all but closed and there’s no pressing need to dress up the windows again until the summer.

But as always, we get what we get and I’ll trade the opportunities presented.

3rd week in a row I am not covering WTI. There’s been more than enough volatility in the ES and NQ to keep me occupied. Friday was a massively wild ride on the WTI roller coaster, of course. No reason to expect this kind of volatility to suddenly disappear either given the situation in the Middle East (and elsewhere).

I Want You to Want… Me
Scroll to top