Blog
You are here: Home / Blog / Patterns / Going Down Like Disco?

I’ve decided I’m sticking with my cheesy music and movie line/title/pun title theme for a while. It’s entertaining for me. Maybe for you too. TA can be dry stuff. So why not?

This week’s post title is actually a song by the Dandy Warhols, a kooler than cool band from Portland, Oregon who’ve been influencing some of the best indie bands for decades. Have a listen to the song while you read for the full effect. Plus it’s got cowbell which automatically makes it awesome.

We had  an interesting week with a nice pickup in volatility, as I was expecting (hoping for) last week. But it was a tough read some days. Friday, many (most?) were expecting a kind of “royal flush” mentioned a few times during the week, but the bulls stepped in, shouted nada! and bid price right back up to the weekly VWAP around 2048. You can never know for sure, but my feeling is that price action this week was warped somewhat by the index futures March-June contract roll, and possibly some jockeying ahead of this coming week’s triple options expiration.

Anyway, I think this one chart sums up the week and also gives us some insight into where we may be headed. Believe it or not, you can read our Evolution charts (or other profile charts, really) a lot like a flow diagram. That’s why the Evolution charts are one of my favorites… they are really great at telling a story day-by-day, week-by-week, etc. Stories put any subject in context, context makes abstract ideas concrete. But I digress…

Start from the upper left, move to the right, follow the arrows: 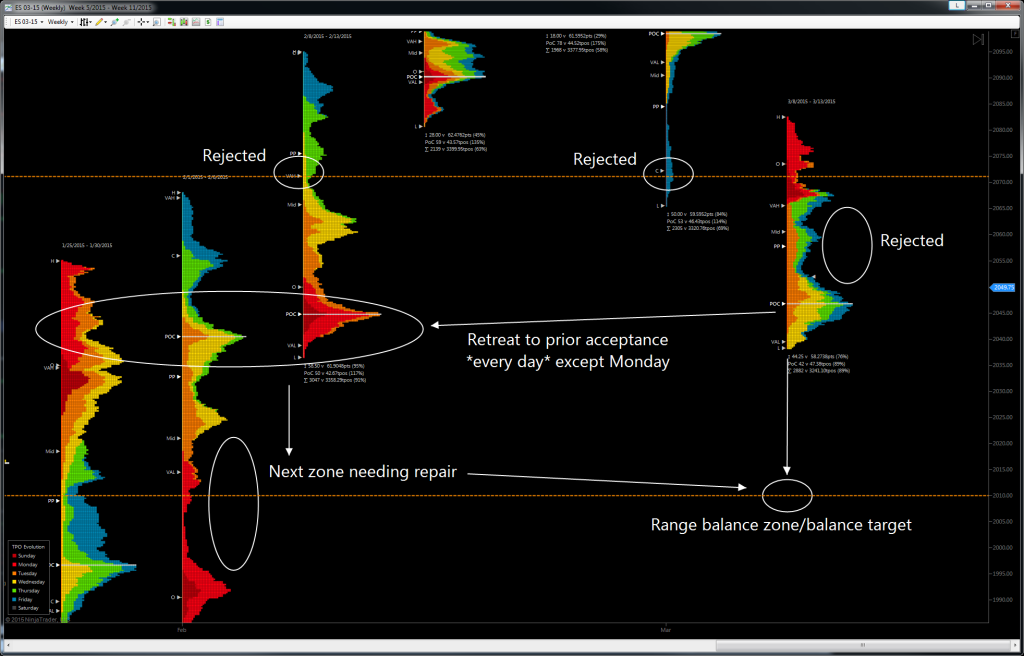 While we’re on the weekly time frame, let’s have a look-see at a couple weekly charts of the SPX.

On the left we have a 2 standard deviation regression channel of the recent solid up-trend from mid-November 2012 to now. On the right there’s a closeup of the past few weeks with an ascending triangle drawn. The two things to notice about this very traditional, basic TA chart is that the middle of the channel was rejected 3 weeks ago and we’ve never really looked back since. This is not a pattern the SPX sees very often. In fact, the last couple times it’s made an appearance was in the breakdown of the trend from March of 2009 to 2011 (left) and July of 2002 to January of 2008 (right):

Twice this regression line rejection proved to be a precursor to a significant pullback or correction. Before I get all giddy imagining the smell of red candles burning bright tomorrow, notice that on the left chart above, during a similar rejection of the regression line (July of 2010) the index bounced right back into the channel. Which is to say anything can happen and the market is always right. Said another way, we have to prepare for multiple scenarios as traders. Which is a brilliant segue into the week ahead, if I do say so myself. ;-}

First, let’s start with some March seasonality statistics for the S & P 500 and the Nasdaq indexes (via SentimenTrader):

Notice that less than half of the time March 16 is a positive day for both indexes and it’s a crap shoot for St Patrick’s Day. Then following the down days there is a stronger tendency, especially in the Nasdaq, for a bounce. I’ll definitely be watching to see if this is holds true this time. The farther we fall, the more inviting price becomes for buyers, save any macro force majeure. And amigos, I don’t have to tell you there’s plenty of news risk and big economic events on this week’s calendar, any of which (read: FOMC) could create a stir.

I’m actually expecting that we’ll be exploring both sides of the current balance area this week to one degree or another. At this point the HUGE consolidation zone between about 2050 and 1975 has a ton of structure, and save some crazy new events such as the death of Putin and a takeover of the Russian government by extremists or Greece (Spain? Italy?) getting kicked out of the EU, it’s most logical to expect that to be a tough zone to break through. Things just aren’t that bad, honestly, and dip buyers have shown they’re ready, willing and able to buy. So for the week ahead I think the 2040ish composite VPOC is set up as the most logical bull/bear line: 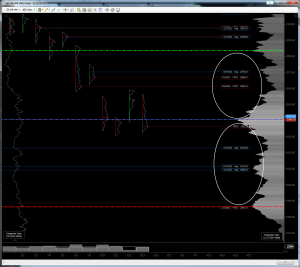 Given what I see I think the most likely zones of exploration are from 2040 down to the balance area around 1985 and from 2040 up to the balance area around 2085. Yep, a full 100 point range. Not that we’ll cover it all, but look left on your weekly charts and you’ll see it’s not out of the question. Again, I won’t be shocked at all to see some exploration of both zones, though I’m favoring scenarios in which explore lower first. We’ll see what we get…

Not covering WTI again this week for the same reasons as last week. Though with a close on the 45 handle, which concluded the week with a huge and solid trend down, there may be a fat pitch to swing at very soon. Charts say lower still from here, with a strong trend in place, but the move is extended enough that it might invite buyers in to trap late sellers for a (short) squeeze play.