Blog
You are here: Home / Blog / Price vs Volume / Keep Your Head on a Swivel

There’s an expression among aviators/pilots which goes keep your head on a swivel. It’s the kind of thing they say to each other as a reminder to stay alert in calmer flight times, just when the first hints that something “interesting” might be about to happen. Here I see my focus markets at important short-term technical spots and set up for some stronger directional force than we’ve had of late.

So here we go…

Well, looking at last week’s post, I said I felt that buyers really needed to defend the 49,50s, and as it turns out they did a pretty nice job . We closed right on that number and basically the mid/VPOC of the January 12 to Friday profile. This is an interesting time frame as it represents the most recent and significant attempt to find an intermediate term bottom: 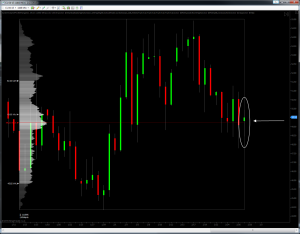 We closed right on 49.52 and in very good balance. As a reminder, profile balances mean that, over a given range of prices and time, the market has found motivated buyers and sellers at low and high prices, respectively, as well as a region “fair” prices in the middle. In a word, the the WTI market has reached an equilibrium,  seen from the point of view above.

Now that we’ve reached an equilibrium and defined a range of fair prices (aka a value area), what’s next? Well, without a doubt this is really an even more critical technical juncture than we were at last week. Previous weeks had buyers were snapping up the contracts left and right. This week, while it’s clear buyers were active and motivated, their thirst seemed to be pretty well slaked at all but the lowest prices available. Just check out the tails hanging off the bottom of the candles on the above daily chart.

That said, the inventory reports show we’re still building stores, generally, and of course producers continue selling into this market every day because they have to. Shale producers can’t really just shut off their currently producing wells by turning a valve, nor would it make economic sense to do so for many of them, so says the EIA analysis. Anyway, this week was a great example of this steady selling pressure. In the chart below both sides asserted themselves at times, but there was a clear down-sloping axis around which the action rotated: 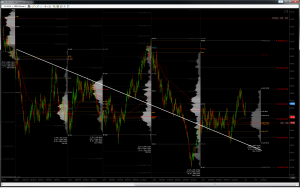 So where does that leave us? Well, if we look at some of the other parts of the domestic energy complex such as natural gas and RBOB prices we can see that they are also contemplating bottoms with the RBOB contract starting to go parabolic. Keep in mind that we’re also coming into the North American driving season so, you know, seasonality is a factor there.

Today, Sunday, we’re at a key technical juncture. We closed on at the most accepted price of WTI since mid January. The last swing has been lower. There’s really little room for doubt in my mind that bulls have to keep the buying lust going for higher prices. While it’s true they are seeing value here, it’s also very true that we have way more then enough waxy shale grease to go ’round. Short of some supply disruptions or calculated short-lived short squeezes, I see the most plausible tenor for the week as a gradual drift to test the upper 40s range: 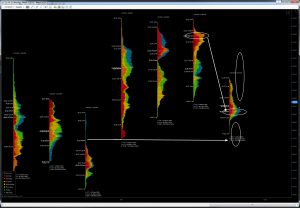 Meanwhile this week was, at times, excruciatingly slow in the SPOOs. While sellers really didn’t show up in force buyers showed no real motivation to push the index higher. In fact, for a couple of days while the overall index drifted higher there was selling under the covers, as evidenced by the percentage of SPX names above their respective 50DMAs: 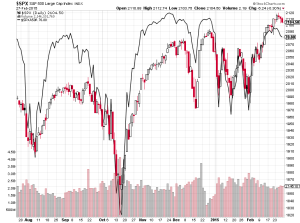 Essentially this some selling under the covers index was taking place or some names were correcting with time and may find support. Not exactly uber-bullish picture. We closed essentially right on last week’s SPY option maximum pain number of 210, which also corresponds to a big LVA/bottom of balance area in the ES: 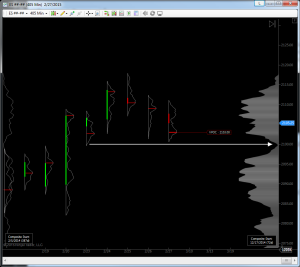 At this point I don’t think there’s a reason to be bearish, from a technical perspective. Be ready for weakness? Sure. But that’s not the same as bearishness in my view. It’s the beginning of a new month which has the potential to bring more selling but also a the potential for an influx of new money to enter the market and push to new highs. Don’t forget the ECB begins their QE program next week.

If buyers fail to buy this dip, they may provide support in the next area of balance below at 2100 down to about 2082. If sellers manage push through there’s a big ‘ol pocket of air between 2082 and about 2068 as well as an open gap at 2066. Large caps would probably be seen as a much better value down there.

Anyway, my view is that it’s all on the buyers now. Failing to support assertively around 2095-2100 means I’ll be watching 2089 for signs continued weakness or merely tepid buying. The air pocket then begs for added attention. Above the 2100 area we have 2107, 2111 and 2117 areas as known resistance.

Even though the market is not expecting much volatility with the VIX closing a little above 13, for some reason I’m optimistic that we’ll see a more exciting week. Assertive bears and bulls, if they show up, aren’t going to telegraph a plan at this stage.

But we’ll get what we get, as always. Trade ’em well this week, amigos…

Keep On Trying ‘Till We Reach the Higher Ground

Death or Glory?
Scroll to top