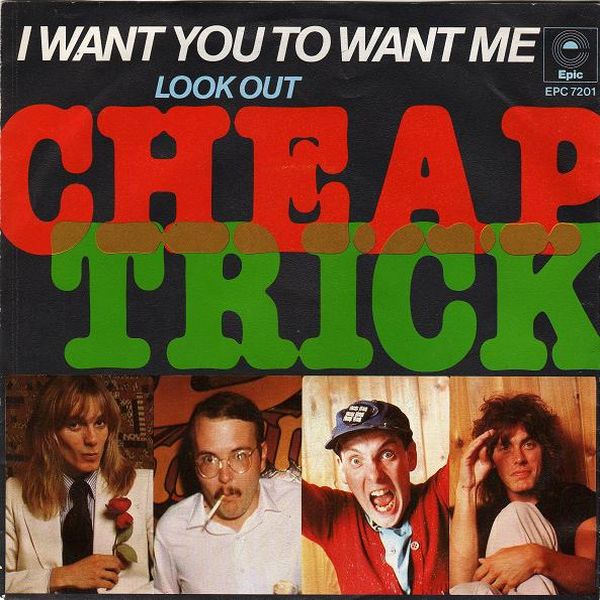 Cowpokes, I think no song better epitomizes the state the US equities market is in as we enter mid April 2015. Here they are, Cheap Trick, live from the Budokan in Tokyo… listen as you read. The opening is the best and pretty much what the SPOOs are saying to you, right now, today, in full-on 70s rock and roll fashion. 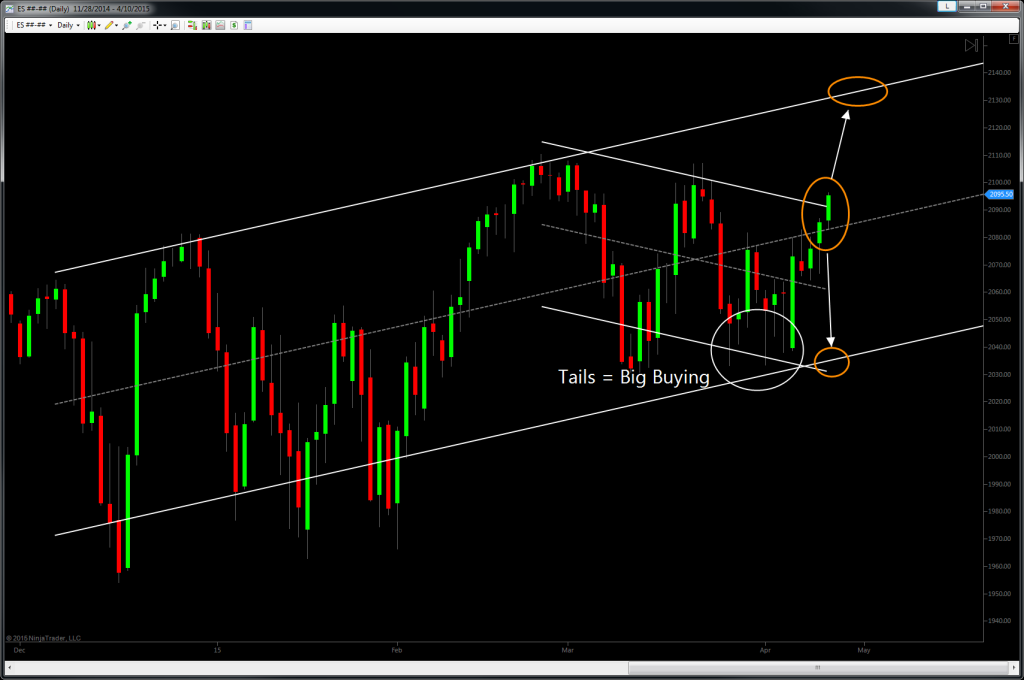 See what I mean? So where do we go now, sweet child o mine? Sorry, couldn’t resist that one.

If I had to guess, based on looking at just this chart, I’d say a test upward is due. I mentioned several times on my daily Twitter homework charts that if buyers could achieve acceptance in the 90s that we’d likely test the ATHs. And I’m sticking to that story.  The chart above shows lots of assertive buying interest in the 30s to 60s the last few weeks. To me, this is clearly OTF activity, and above where we are is where their payday awaits. What’s more, when you zoom out to the weekly, there’s just no denying the massive force of the bull market we’re still clearly in. I mean, look at this thing. It’s a monster: 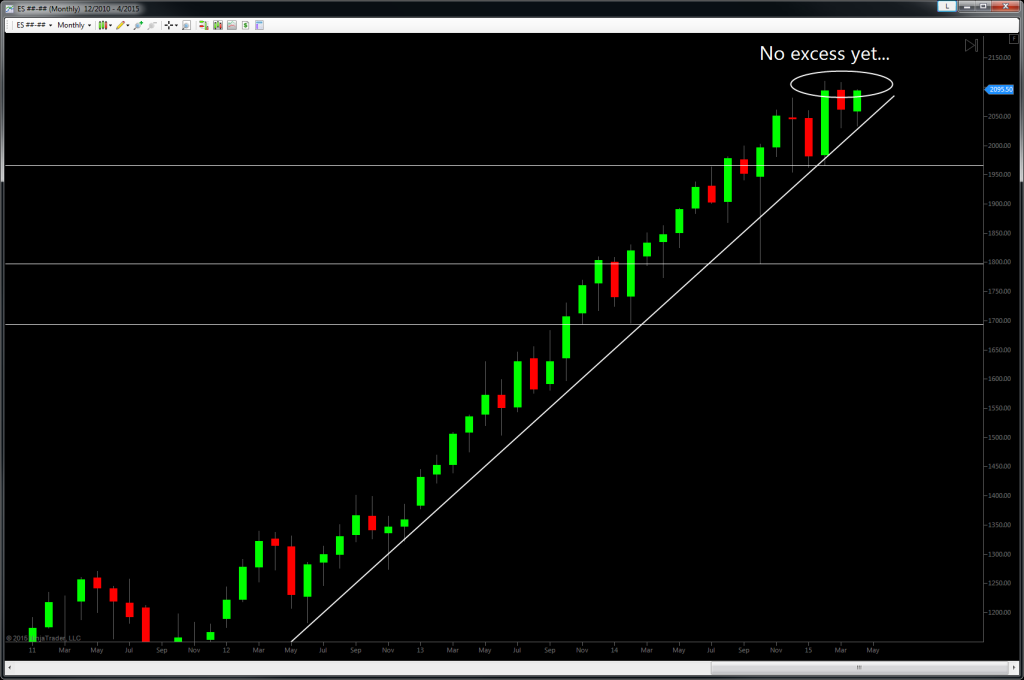 There’s a couple ways that bull trends generally take a larger pause (or end). The first is a “blow off top,” marked by frenzied buying and parabolic candles. In auction theory terms, this is known as excess. Look at the chart above, nothing like that yet. The other way is when, to but it plainly, there’s just no one left to buy. Everyone likes the market (or specific stock), but everyone who wants to own it at a given point in time already does. This kind of thing has happened several times with AAPL over the last few years, for example. A part of me thinks this is kind of the place were in now with US large caps. We’ve had about a dozen attempts in the ES at holding the 2100 zone and each time it failed. Not with a big bloody sell off, but with a push back down to recent value. Each time we bounce up we bounce a little less high, kind of lke a slinky walking down stairs. Look at the daily chart above again and tell me you don’t see what I mean.

So as of Friday we’re in just the right place to test the “Slinky” metaphor, aren’t we? If there’s no one left to buy (for a couple of very practical reasons I won’t bore you with here), then we should see some longs ready to take some profits and the Slinky will start rolling over toward the next step down.

So which is it? Breakup or breakdown? Well, this time it’s complicated. Let me show you a couple things, and you’ll (hopefully) see what I mean. First, not that it’s the be-all-end-all, but SentimenTrader has some pretty good charts which can help with sentiment (duh) and seasonality in particular. So according this this measure, we’re now in extreme territory just like we were a few weeks ago with the so-called “smart money” and “dumb money” viciously at odds over the market direction: 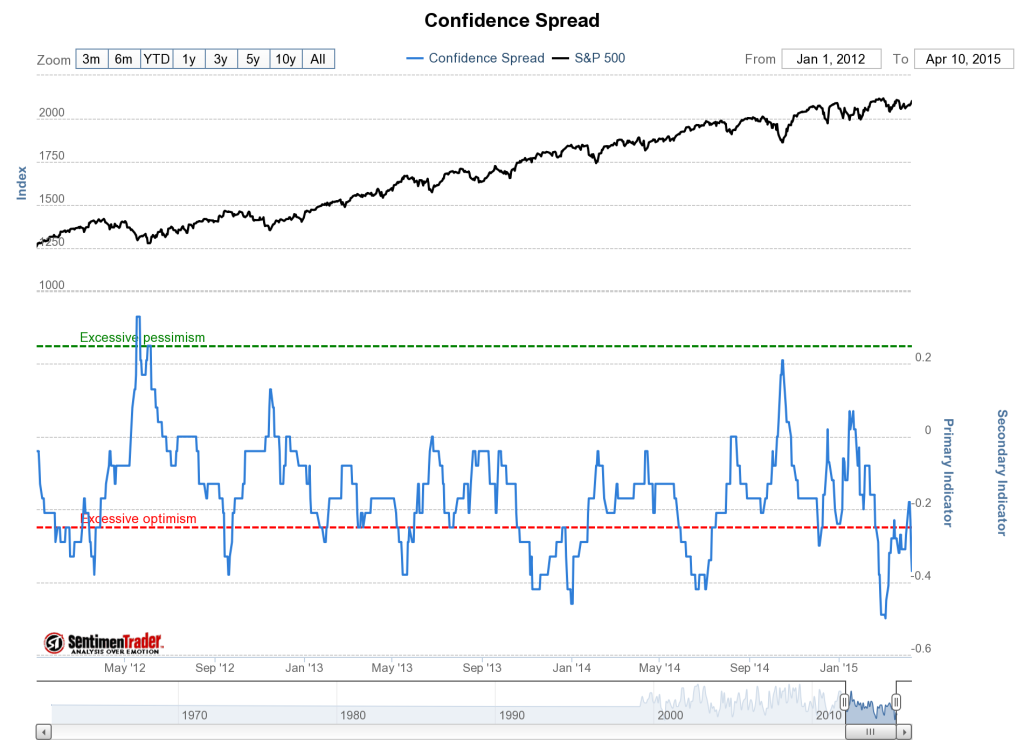 This chart says big players have little interest and are expecting and/or positioning for the market to take a dive while at the same time small players are excessively bullish in outlook. Honestly, I really never pay too much attention to sentiment indicators and measures except when we’re at intermediate term inflection points, like we are now.

Now if you don’t know already, it’s important to point out that there’s just no way to know why any class of trader is net short or long from the COT. All we know is they are positioned one way or the other on a  net basis. Keep in mind that all futures contracts are both positioning and hedging instruments. So for example, if I run a hedge (or whatever) fund and I have big long equity exposure and I’m not feeling confident about the market’s direction I can hedge off some my market risk by shorting the ES. That way if the market goes down my losses are at least somewhat muted by the gains from my short contracts. The other possible reason to be net short is that you are confident that the market is going down and you want to make a levered directional bet. We don’t know why there’s all this net short exposure now, and that’s the reality. But it’s there for sure.

OK, so let’s get back to the upcoming week. Here’s the thing I am watching like a hawk now. I call it the come-to-Jesus line, and I think it will help us know whether this up-move is for real or just a… wait for it… Cheap Trick: 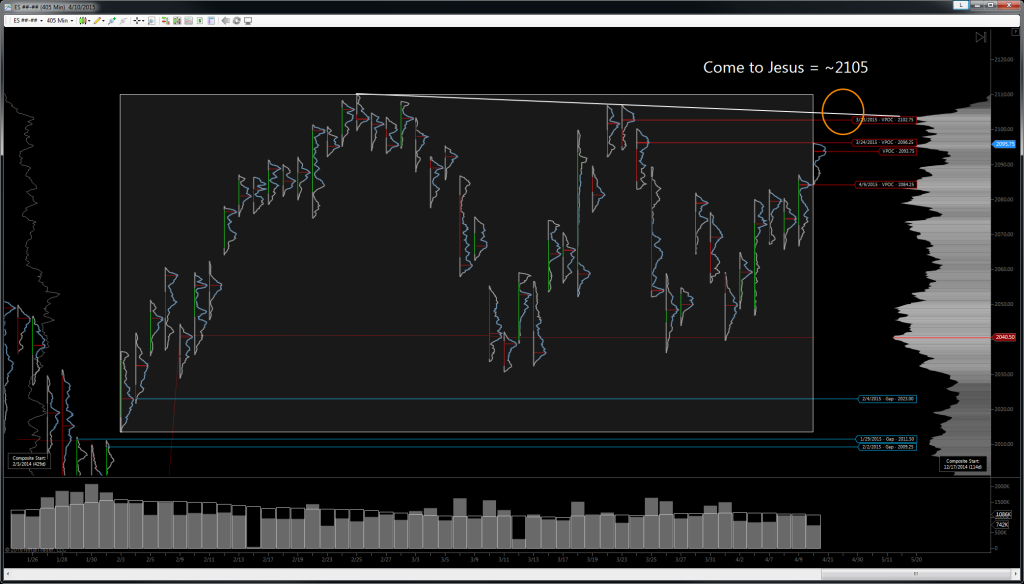 Basically, I want to see how the ES reacts to this trend top – or whether it fails to get there at all – before I make any big directional bets. Let’s be honest, it’s not like the journey even to the 2090s was smooth and stable, leaving solid structure underneath as a base: 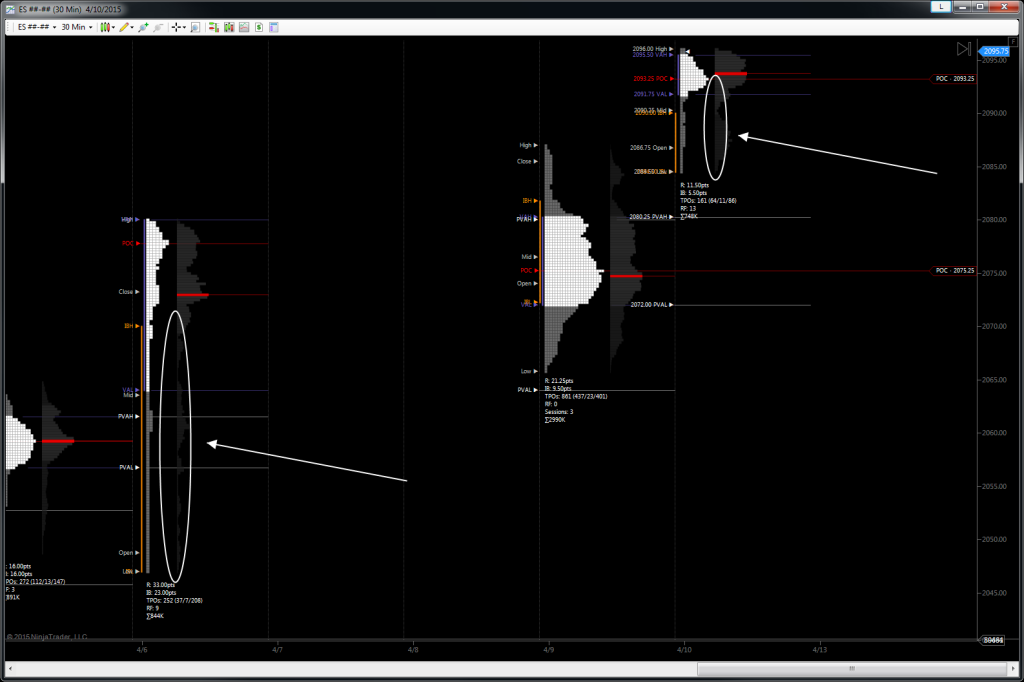 There are some significant flaws in this move up in my view, and Friday left a pitifully weak and ugly P-shaped (imbalanced selling) profile. So lets see what Monday brings. Speaking of Monday, know that I’m taking this one day at a time now. Given the current location, I think it’s silly to look out any further, so I’m calling the bull/bear zone for Monday around 2091, and watching the 96, 2100, 03 and 05 levels like a hawk to see how we react. 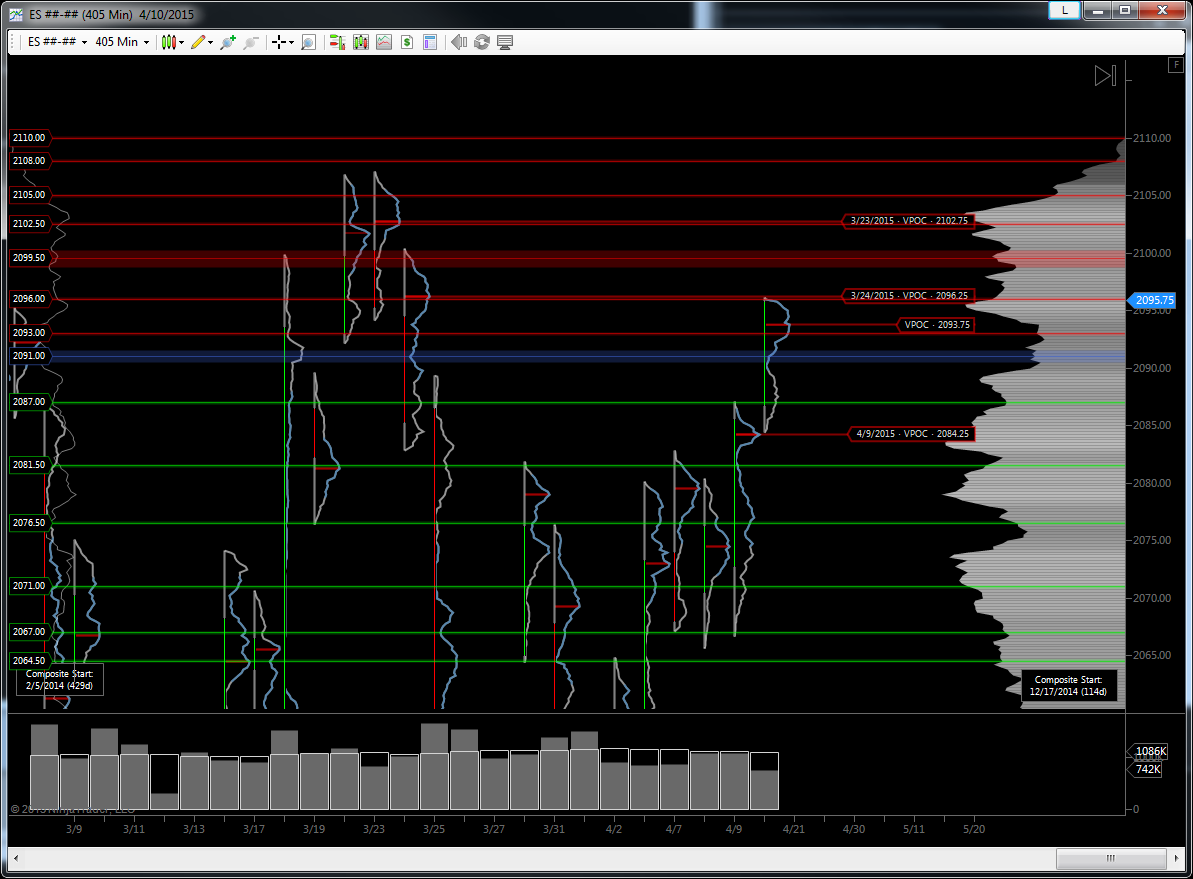 If you’ve been trading this contract the last several weeks then you know this monthly chart is the only one you need to pay attention to for anything other than intraday prices: 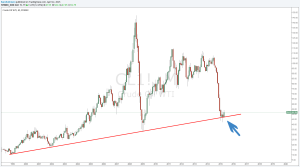 Contact with this trend line will either act at a floor for a rally (looking that way at the moment) or if it’s broken it sure seems we’ll head for the depth below with force. Round and round she goes, and where she stops nobody knows…

Dry as a Bone