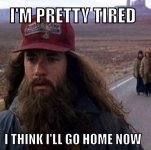 It’s no secret that’s I’ve been feeling disturbances in the force for some time now. If you look back through my weekly posts (or watch my Twitter feed) you already know I’ve been very skeptical of them moves the markets have been making lately, particularly since the first of the year. Well, amigos, I could very well be wrong (of course) but I think the chickens are coming home to roost. Finally.

To put it simply, it looks and feels to me as if this market is just plain out of gas for the time being and needs a well-deserved correction to revive the will to run any further distance. Said another way, in the immortal words of Forrest Gump when he was at the sudden end of his cross-country run for no particular reason, “I’m pretty tired. I think I’ll go home now.”

Last week I likened the price action of the SPOOs to a Slinky walking its way down the stairs and I was looking to see whether we’d take another step down or spring up on to a new level. As it turned out the Slinky metaphor was right on the money. We rolled over and took a big ‘ol step down just as it looked like we were set to take a step, albeit a tentative one, higher. All 3 of the senior indexes utterly failed to hold the top of their recent trend lines: 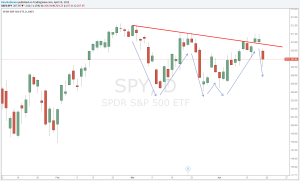 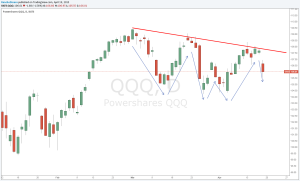 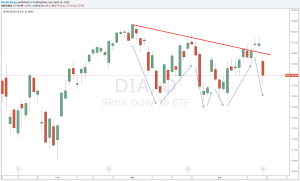 What’s more, I think the divergence between the SPY and DIA versus the QQQ is the most telling (and damning?). If you look closely, you’ll see that the big caps were actually doing a better job at testing highs than the QQQ. Which is exactly the opposite of what I’d expect from a market with prices being driven higher by future growth and earnings prospects. Here’s a closer look:

Note the difference between the channel slopes between the ES and NQ. Again, this is exactly the opposite of what I’d expect to see. When the most significant appetite for risk assets this close to all time highs is in the US large caps – which of course have relatively stable prices and, most significantly, dividends – something is just not right. I’m not even going to go into the reasons why I think this might be. I have theories, but the evidence is right in front of us, and so in a pretty significant way none of that really matters now. With that said, let’s peel back the covers and see what there is to see: 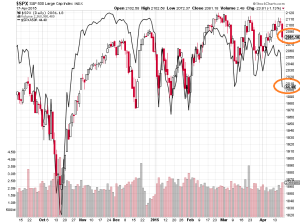 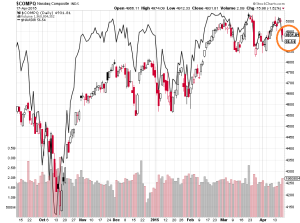 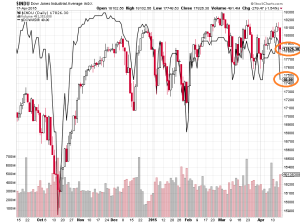 One of my favorite at-a-glance ways to gauge the health of any of the indexes is to look at the percentage of stocks above their 50-day MAs against the price of the index. In each of the indexes, in the large caps especially, we see large divergences appearing. This means one thing – weak breadth. The large cap indexes are looking mostly OK on the surface because they are being propped up by just a few names. Compare the recent prices to the percentages and you’ll see what I mean. The SPX at 2081 with the percentage at 44? The last few weeks the index price has been much lower with similar or higher percentage. To me this means we may no longer be at just an inflection point. We may finally see some significant selling take place. A market held up by just a few names is not exactly the picture of health.

A few more items worth highlighting: 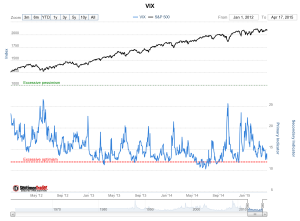 While it’s true the VIX isn’t expecting much volatility, in some ways I think the VIX is a broken indicator. At times when large money is planning to do the selling they won’t be buying protection for long positions. Why would they? It’s insurance they don’t need and it sends up a huge red flare that something is about to happen. Which, of course, is counterproductive for them. 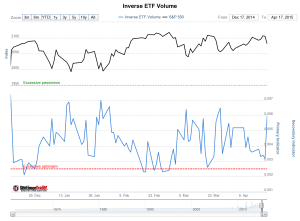 Next, inverse ETF volume spiked in a huge way on Friday. This means one thing – traders of many sizes are looking to position themselves for a drop. 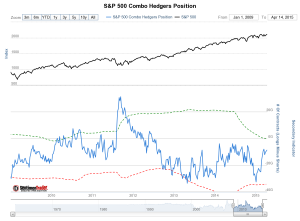 Once again, combined large money positions in both the SPOOs e-mini and big contract remains net short and has been some for some time. The short positions reached a peak a while  ago and my interpretation of this – given the other clues I see – is that the short positions are no longer hedges but now may be (at least in part) directional bets. 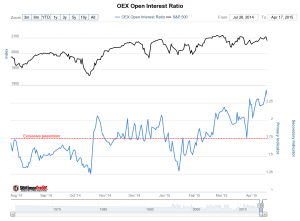 Finally methinks it’s worth calling out a decades-long extreme in bearish bets on the largest of the US large caps going into this week. The P/C ratio against the S&P 100 is about 2:25 to 1. This is monstrous, relatively speaking, and hasn’t been this high in a decade and a half. If this isn’t a zero-confidence vote, not sure what is.

Anyway, as I’ve said many times before I make a plan for both directions, favor one direction, and determine what criteria I’ll use to execute that plan for one direction. Or the other if I’m wrong. This week it should be pretty clear I’m  looking for some downside. It may come early or late in the week if it comes at all. I’m not saying we’ll wake to a monster gap down on Monday, though that is a possibility.

On the downside the first important area to watch is the area between the Friday low and about 2045. This is an area of extremely weak structure and I expect that to be covered quickly of selling can manage to push through about 2060. Next, we have the extremely obvious area of support (#2 on the chart below) from 2040 to about 2030. If sellers manage to destroy long positions in this region  this region I fully expect a test of the lower value of this zone at around 1985.  If 1985 fails to produce buyers then I have to start looking to the 1950-70 area. 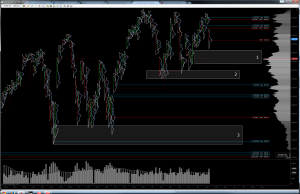 So there it is folks, a summation of what I’m thinking is possible and plausible in the week (or even weeks) ahead. There are lots of ways in which this could be wrong and maybe we’ll hold or move higher. But my sense is now stronger than it’s been in many moons that we’re about to see a significant intermediate term character change in the equities markets. As I do in times like this, I let it play out and take it one day at a time. But in my experience it pays to always know what the higher time frame is up to, and at this point I think they’re having having a harder time covering their tracks.

When things look this crazy in equities I may not be making any significant trades in the oil patch. So not covering it this week. But look left on your charts and what’s happening should be pretty obvious.

I Want You to Want… Me