We had one hell of a week in equities, didn’t we? Going into it (for me) was a lot like calling the 800 number for the utility company, impatiently trying to wade through the phone tree options to get to the one I want.  As it turned out I had to back all the way out to the top level, stabbing and swearing at the 10-key menu, to get to the trading scenario that ultimately worked.

Last week I felt like the time was more ripe for a significant correction than it’d been some time. But no. It wasn’t to be. That really leaves only two explanations: my thinking was early; or my thinking was wrong. I feel confident enough that I didn’t somehow misread the technical tea leaves.  The charts were pretty clear. But guess what? Buyers wanted to buy despite all the lines and letters I drew on my charts. ;-} I mean, check out the circled region. Sure looked weak at the time, like a slinky about to walk down another step: 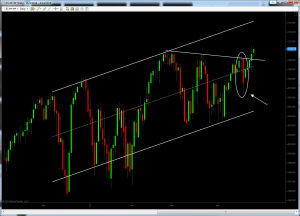 If you hang out in the Twitter #twitpit you may know that I was actually pretty short the indexes for the first part of the week based on my thesis. But by Wednesday mid day it became pretty clear that the morning’s dip buyers were serious and I unwound the remainder of that position while the unwinding was good.

I could go on and on and on about how as a trader it’s paramount to stay flexible, but I won’t do that. I’ve done it before. Instead I’ll just say that’s why I make 2 plans. I prepare for both success and failure, because when I do that I can easily flip failure back to success.

Anyway, let’s get on with the show…

That all-important weekly historical chart I posted a while back? Wow, you couldn’t have asked for a better performance. Here it is, exactly the same line and arrow as a few weeks back: 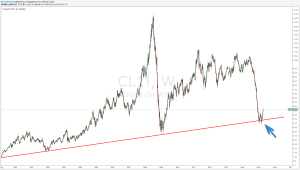 On the weekly time frame it looks like we’ve had a pretty spectacular and predictable bounce. Zooming in a little close and we see that this week in particular was all about consolidation following an equally spectacular 5 straight weeks of vertical development: 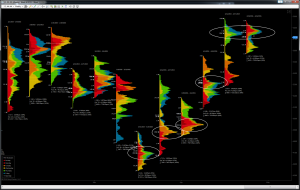 … with the POCs and overall balance remaining stable in the mid 57-58 region. The stable consolidation is even more evident on the daily chart: 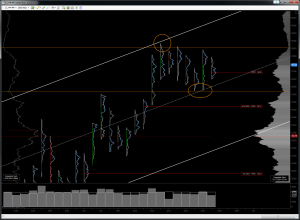 … with a clean test of both the mid and top of the regression channel I have from early March. And from a classic TA perspective, this week looks a whole lot like a bull flag in the making, doesn’t it? So for the week ahead my scenario numero uno is for a test of the next balance area above the 58.60s up. The 60 handle is the first natural upside objective as it’s a round number and also because it’s smack in the center of the balance area formed when the bear flag/consolidation zone was created there in December (all prices are relative to the June contract, by the way): 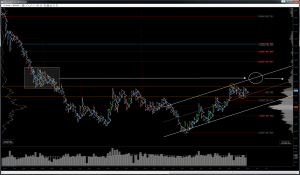 Oh yeah cowpokes, we’re going to be talking about the SPOOs and the shiny yellow stuff at the same time. Why? Well because gold is a pretty good sentiment indicator. In times of fear, the price goes up. In times of confidence (complacency?), the price tends to go down. Of course, we also know that the gold price “floats” on the price of the currency in which it’s denominated as well. But at this juncture in the equities market I’d rather look at what the price of gold is doing overall, globally, as opposed to how the value of specific currency is affecting it. So let’s start there. In my ideal world, the price of gold and the price of equities should move inversely. I’m not saying I expect them to move in lock step, I’m only saying that in times of market development (such as now) they should be inverse in their directional movement. 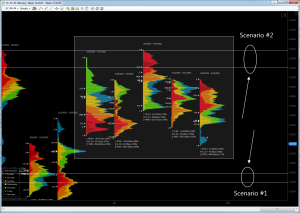 Anyway, just like the SPOOs (below), gold has spent the last few weeks in a consolidation box pattern (above):

… and while the SPOOs have finally (!!!) broken to the upside at the same time gold looks to be starting some downward vertical development. This is exactly the kind of thing I’d like to see for a credible equities rally.

So for gold this week I’m leaning toward a test of the 1155-60 zone, though at this point I’m not really expecting anything lower regardless of what happens in equities. Should that downward development fail to materialize most likely something unexpected and potentially destabilizing has happened in the world macro balance. In that case we could even see a return to the previous zone of the failed auction in the 1215-25 zone. Which brings us back to the SPOOs…

The range breakout this week was a long time coming, of course, and it left a new but significant feature in the 2105 area on both the time (above) and volume (below) charts. This should be considered something of a very short term, intraday line in the sand. Taking a step back, though, it’s very common for the SPOOs to give as much as half of the recent range back before climbing higher.  So I’m pondering 2 scenarios for this week. The first is a slow grind higher, a la your typical week in late July. I think early in the week, Monday especially, chances are very good for some additional upside. Mondays are QE day in the EU which means hot money is spewing forth, and also in the states Mondays are a very common day for long-only mutual funds to average in their buys near the RTH VWAP line.

Beyond Monday I am going to be on the lookout for a punch down the the 2100 area, and I think we could easily see the 95-85 area and still be in rally mode. A quick failure about 05 and a push down to the 85-95 area would likely get enough traders bearish to be caught off guard and provide some buy stop grease for subsequent rally to even higher highs: 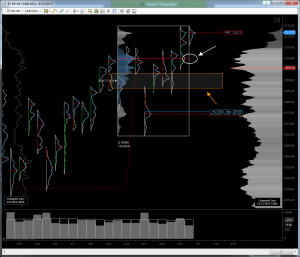 So for this week I’ll be favoring upside scenarios until I see evidence otherwise. The best long trades will likely come at the pullback levels mentioned above. I’m not of the opinion that, at least on a swing timeframe, this move higher is not something I want to chase. But that said, I think the realistic upside targets are around 2125-2130ish, and for the mega bull scenario I can even plausibly see up to the 2145-50 area. Again, this breakout is still very wet behind the ears, naive and vulnerable, so it’s not wise to chase it. Let it prove itself first. Shorting breakdowns of the areas mentioned above and getting long the pullbacks (also highlighted) is the way to play this week in my view. And that’s what I’ll be doing.