Given the what’s been happening in the US equities markets the last couple weeks I felt it only fitting to honor this week’s post with one of the best worst songs from one of the best worst bands in one of the best worst genres of rock and roll – “Same Old Situation” by Motley Crue. And also they are on their farewell tour this summer. So listen in while you read. If nothing else it’ll put a smile on your face with its ridiculous but nostalgic excess. The same could be said of the state of the markets right now, no?

Well, we got it. Yes, it. The elusive, exclusive initiative buying we needed to push back through the critical 2105-2107 area in the ES that’s been so difficult to break lately. Friday marked the 6th (count em’) attempt above this zone since the 3rd week in April. Of course, the question of the hour is whether it’s different this time. So… is it? What’s changed?

Let’s have a look and see what this week’s COT report says about how the important reportable categories are positioned.  In the ES we see the Asset Manager/Institutional category is long 1,229,592 (change -43K) contracts and short 516,499 (change -22K) contracts with both sides decreasing exposure from 1 week ago.  Levered funds are  422,587 (change -25K) long to 770,747 (change +38K) contracts short, while the “other” category exposure remains net short by more that 2:1.

So what the takeaway?

I’m thinking here’s really a couple of plausible explanations. First is that there is just plain disagreement between the biggest money and the aggressive money over market direction. If you lay the common narrative over the numbers, the aggressive money thinks the market is over-valued and is trying to get in position for a top. The other plausible explanation is that the increase in short exposure is actually hedging activity for long equity exposure and there is actually a belief new surge of money about come rushing into the market, tsunami style.

To be frank I find the former scenario the most plausible given how the story has unfolded over the last few months. In my view the range-bound sloshing of recent months is most credibly seen as participants disagreeing over the intermediate term market direction and battling to take control of it. But that’s not to say the latter scenario lacks all credibility. I think it does, but of course I have no visibility into what money is lurking on the sidelines and how much is there. But one thing I do know is that now that Q1 earnings season is over, and with interest rates remaining crazy low, there will be buybacks. Starting soon. This self-generated demand is kind of like a snake eating its tail in my view, but it is what it is. I have to account for its potential effects on the market writ large.

So… let’s start with the extremely solid channel built by the ES starting overnight on Thursday: 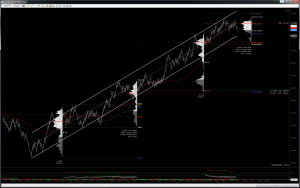 But when we start looking at the RTH only trading, we can see this march up was not without it’s structural flaws.

Since we’re focusing on the coming week let’s start with that monster gap up on Friday. Given the RTH volume on Friday (over 1M contracts) it would seem that someone was trying to send a message. There was a massive run of stops overnight Thursday all the way to 2107 and the bids just kept on coming. All day Friday there was selling into this move up, and this can be clearly seen in the order flow, the top bulge of the profile and in just in how compact the up-move was considering the volume.

Given this, my overall plan for the week is to watch for the same-old-same-old or for a significant character change in the tone of the market. Evidence of this change will be seen in a buying appetite for prices over the 2105-07 area. Such a change in tone would represent that buyers are now seeing value in large caps, where they haven’t recently, even so close to the all time highs. This is incredibly bullish, at least in the short term. On the other hand, you’d be crazy in my view not to expect a clean trend up free of the same range-bound sloshing.

So… first and foremost this week I’m going to be on the lookout first for a  more of the same in the form of the kinds of repair shown below. In my plan that would call for at around a 50% retracement of the late week up-march from about 2060 to 2115 should we push back through that all-important 2105 area shown below. 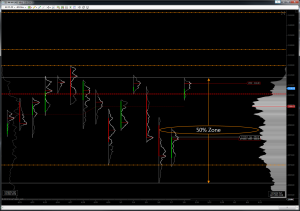 This half-back area, sitting from about 2090-2083, would be where I’d expect assertive buyers to be found on any push lower. If they liked it above 2105, the same buyers should be ass-over-tea-kettle in love with it at 2085.

But let’s not get too excited just yet. As I said, I think there would have to be a significant change in character in the market for this to happen… and I’m pretty sure I’ll know it when I see it.

Beyond this… who knows. I’ll be taking it one day at a time.

Not covering my other markets this week, folks, other projects beckon for time and attention. Trade ’em well this week, amigos…